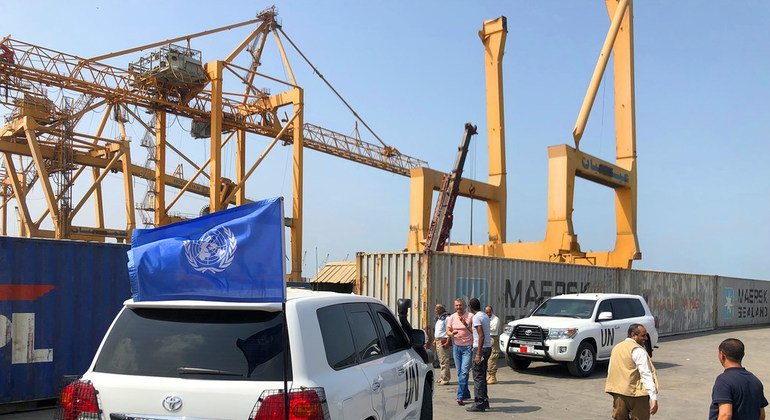 The condition of the aging vessel, FSO Safer – officially owned by the Government of Yemen, but controlled since 2015 by Houthi rebels – is deteriorating daily, upping the risk of an oil spill that would wreck ecosystems and livelihoods for decades, said United Nations Environment Programme (UNEP) chief, Inger Andersen.

A spill from the decaying oil tanker, SAFER, off the #Yemen coast could directly affect 1.6 million Yemenis – many of whom already depend on humanitarian aid. I briefed the UN Security Council on the situation. The UN remains ready to address the problem: https://t.co/tP94gojQKn pic.twitter.com/zBsGVekV5h

The one-time supertanker, built in Japan in 1974, sprung a leak in late May, flooding its engine room with seawater and threatening to destabilize the vessel and spill its cargo, the Council was told.

“Prevention of such a crisis from precipitating is really the only option”, Ms. Andersen told the Council, which with the exception of Tuesday, has been meeting via video-teleconference since March due to the COVID-19 pandemic.

“Despite the difficult operational context, no effort should be spared to first conduct a technical assessment and initial light repairs,” she said.  In the longer term, she added, the best option will be to offload the oil from the ship and then tow it to a safe location for inspection and dismantling.

For now, the international community must come up with a response plan should an oil spill occur, she said, emphasizing that the Safer could release four times more oil than the notorious Exxon Valdez disaster did, off Alaska in 1989.

Neither war-torn Yemen nor its neighbours have the capacity to manage and mitigate the consequences of such a huge spill – and private salvage operators will be reluctant to take on a job inside a conflict zone, she said.

The Regional Organization for the Conservation of the Environment of the Red Sea and the Gulf of Aden has drafted a regional contingency plan, but UNEP feels that it needs considerable support to be tested and, if required, put into action.

“Time is running out for us to act in a coordinated manner to prevent a looming environmental, economic and humanitarian catastrophe”, she said.

Lowcock: we’ve ‘been here before’

Echoing her appeal, UN humanitarian affairs chief Mark Lowcock said that the Houthi authorities confirmed last week that they would accept a long-planned UN mission to the tanker, which will hopefully take place in the next few weeks.

“We have, of course, been here before”, he said, recalling that Ansar Allah – the Houthi militia’s formal name – gave similar assurances in August 2019, only to cancel the UN mission the night before it was to go out to the vessel.

“The Ansar Allah authorities have an important opportunity here to take steps that will spare millions of their fellow citizens from yet another tragedy,” said Lowcock, who leads the Office for the Coordination of Humanitarian Affairs (OCHA).

“We are eager to work with them to do this.”

Widely described as the world’s worst humanitarian crisis, Yemen has been torn apart by more than five years of conflict between the forces of President Abdrabbuh Mansur Hadi – supported by a Saudi-led international coalition – and mainly Houthi militia, for control of the Arab nation.

Fears of famine have resurfaced as the World Food Programme (WFP) warned on 10 July that 360,000 severely malnourished children could die unless treatment continues and aid is stepped up.

The Red Sea is among the world’s most important repositories of biodiversity, supporting many important species including marine mammals, sea turtles and seabirds, Ms. Andersen explained.

It’s estimated that 28 million people rely on the Red Sea and its coastal zone for their livelihoods, she added.

Fisheries all under threat

Citing a modelling exercise by independent experts, she said that if the Safer spills its cargo between July and September, given prevailing winds and currents, it would affect 100 per cent of Yemen’s fisheries within a matter of days.

The closure of the nearby key port of Al Houdeidah for five to six months would meanwhile trigger a 200 per cent increase in fuel prices, while food prices – in a country that must import nearly everything it needs – would likely double.

While the west coast of Yemen would be hardest hit, the impact would quickly extend to Djibouti, Eritrea and Saudi Arabia, affect demand for seafood from the Red Sea and impact on the more than 200,000 ships that pass through every year, she warned.

“Even if the response activities were to be initiated immediately after the oil spill, it would nonetheless take years for ecosystems and economies to recover.”