Close
Ask a Question
Home/ Africa Confidential/What if You’re A Cycling Pro in an Unprepared Environment? 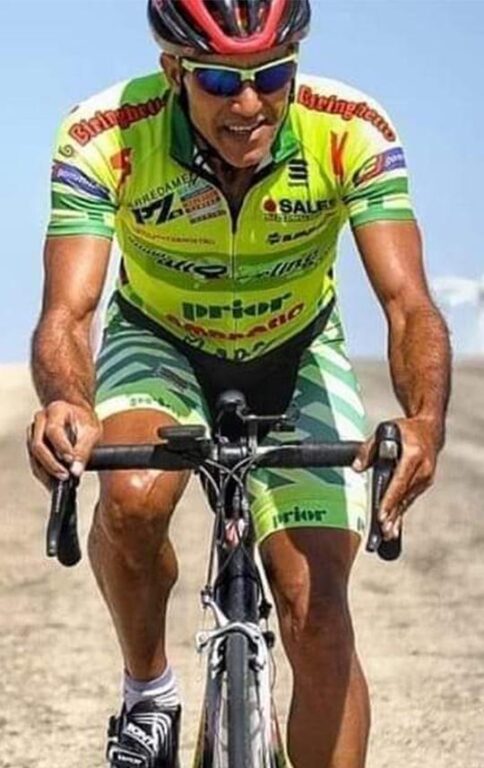 Captain Nader Zuqiba in a cycling trip in the Sharah Mountains, who was injured in a cycling accident. Photo credit: Omar Khlifat

In 2018, Nader Zuqayba, 53, a former coach of the National Cycling Team, was hit by a car during his morning exercise on his bike. As a result of this accident, Zuqayba was taken to the hospital and underwent an 8-hour surgery, which ended with the installation of 10 plates and 40 screws as a result of broken bones in the face. Nader could not speak for 5 days.

Despite the damage caused by the accident, Zuqayba, his persistence to recover and return to his favorite sport helped him participate in a 200 km race, just 3 weeks after the accident. He says, “I should have gone back to breaking the fear barrier. If I hadn’t cycle this race, I wouldn’t be back in the bike race”.

Zuqayba was aiming for another goal which was to encourage cycling lovers to continue. What happened to him forced some of those he knows to think about abandoning this sport, after seeing what happened with a professional coach like him.

In this report, we spoke with a number of cycling professionals, and heard from them about their suffering with Amman’s unprepared cycling lanes, and with some motorists who do not respect the right of cyclists.

Zuqayba says that he used the necessary protective equipment on the day of the accident, as he usually does. He was riding his bike on the far right of the street, but a car suddenly surprised him, hit him, forced his face into the car body, and “bled for half an hour”.

Cyclists in Jordan are forced to use the streets designated for vehicles due to the lack of spaces or lanes designated for them. Although this does not discourage many of them from practicing this sport, the problem is that some motorists do not care about the cyclists around them, which leads to accidents, some of which are serious. Zuqayba explained that there is no entity in Jordan that specializes in following-up on the accidents of bicycles, including injuries and deaths. What happened with him is a good example of this. The case was referred to the court 2 years ago and has not yet been sentenced.

Haneen Al-Khatib, 24, works in a sports organization, as well as working as a guide in a bicycle store. Her passion for bicycling prompted her to practice this sport on the streets of Amman after her return from the UK in 2010. Yet, she faced many difficulties, summarizing them by saying: “The streets are not suitable for this sport. They are not flowing and narrow along with lacking cyclists’ lanes”.

As for Sari Hosseini, 32, he is the owner of a bicycle store. He started cycling as a university student looking for a suitable means of transportation to save time and effort, so that the bike becomes his primary means of transportation from 2010 to 2013. Hosseini says: “Jordan lacks cyclists’ law. The law treats us as pedestrians. If we were in an accident, the cyclists are never guilty. This is the only mention of cyclists in Jordanian law”.

Sari added that one of the simplest rights to consider is that the sewage holes vertical, not horizontal so that the bike wheel does not get stuck and the cyclists is injured. According to him, despite the communication with the concerned authorities in this regard since 2007, no one has responded to this request.

Motorcycle Accidents May Result in Death

Sahm Matbai was in a runaway accident, as a result of which he lost his life while cycling on the airport road in 2017. A 32-year-old Sahm died after establishing with his friends Salam and Ghaith a team to practice cycling.

Sahm and his friend Ghaith left on the day of the accident to exercise their hobby on the airport road. They ended the first part of the journey safely and started to go back home. Sahm was run over by a vehicle that escaped. The car clung to him and crashed into the back wheel of his bike to through him for about 30 meters. He lost his life immediately, according to the testimony of Salam, who described the news of his death as “shocking”, and which affected him as he says: “I did not sleep for three days of dread and fear”.

Salam explains that the impact distance was estimated based on the location of the blood and the location of the bike parts, which he later turned into a chandelier. He hung it in his shop that he founded in Irbid, after a six-year journey with the national cycling team, to tell the story of Sahm to anyone who asks about that chandelier.

A month after Sahm accident, cyclists organized a march under the slogan “I am Sahm”, with the participation of 150 cyclists. They aimed at educating drivers about the need to be careful and to keep a safe distance between the car and the bike. They also wanted to remind of the rights of riders and the need to find them lanes.

The participants also planted a tree in the place Sahm died. They put information about him in the surrounding area to always remind people of his story, and to have any cyclist water his tree when passing by it. Salam said: “Even if I passed the place in my car, I should pay it a visit. Anyone could have been in Sahm’s place as long as the laws and lane of cyclists do not exist”.

The President of the Jordan Cycling Federation, Jamal Al-Faouri, stresses the need of cyclists for a suitable environment and appropriate infrastructure, the simplest of which are dedicated streets that are free of vehicles, without bumps and sewage holes or any other obstacles, so that cyclists can train in it. He adds that the federation is working to facilitate cycling events, in coordination with the Greater Amman Municipality and the concerned authorities, to provide security escorts and an ambulance to protect the participants in the events. The federation is also arranging with GAM to improve the infrastructure and provide a bicycle track in Hussein Gardens.

Naama Qatanani, Executive Director of Engineering, Greater Amman Municipality (GAM), talks about the mountainous nature of Amman, which directly contributed to the shortage of areas designated for cyclists. “The inclination of the streets in the capital is higher than the natural limit and this is due to the nature of the city,” Qatanani says. She also notes that in the Hussein Gardens area for example, “the inclination rate is about 30%, so the GAM is working on having a designated area for bicycles in every new big or medium-sized park where the percentage of inclination is 10% and less. On the streets of the capital, Amman, it reaches 18% -25%”. 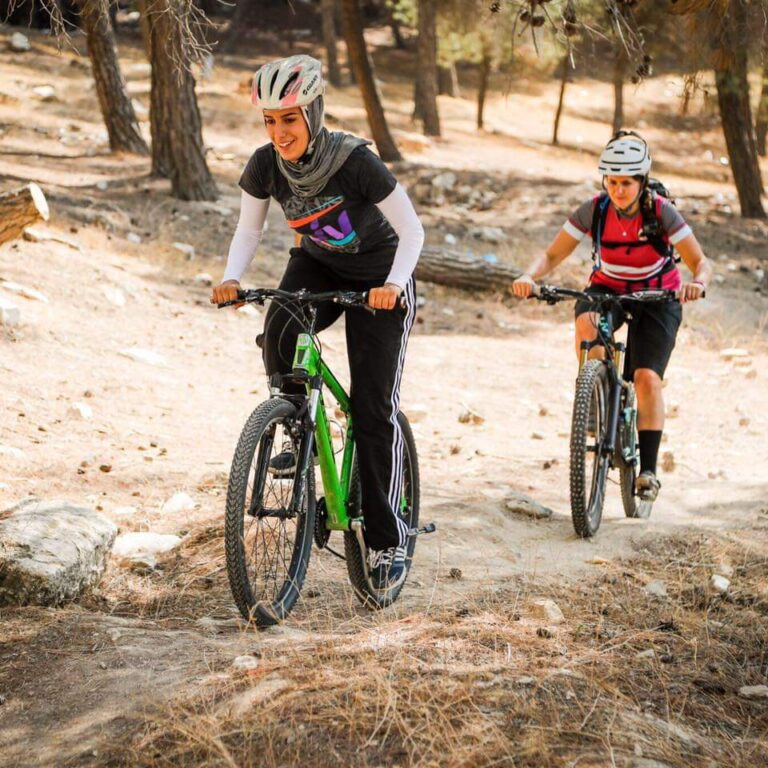 A photo of Haneen Al-Khateeb during training on mountain cycling in a new trail, was created by 2 volunteer cyclists. Photo credit : Jef Clark

Anoud Awamleh, 27, Jordanian cycling team member, Al-Asayel Club member in Dubai, Duathlon contester (a two-way race that starts with running then cycling), and a former triathlon contester (a three-way race that starts with swimming then cycling and ends with running), says she is struggling to find a convenient place to work out before traveling for various competitions.

Awamleh believes that her readiness is less than the rest of the participants from different countries of the world in foreign races, as they have fully equipped infrastructure in their countries, which helps them to maintain the exercises, and this creates a state of “awe” for her during competitions, she said.

She also complains that most of the streets in Jordan suffer from cracks, and are filled with holes that the bicycle might fall in, in addition to the projecting reflectors and high bumps that contribute to the explosion of wheels. As for night exercising, she faces many problems, the most prominent of which is insufficient lighting in most streets. Awamleh has pointed out the lack of acceptance by some of the practitioners of this sport, and their weak awareness of it, not to mention the vehicles that stick to bicycles and do not leave a safe distance. This is the biggest problem, according to Awamleh.

Al-Faouri also confirmed this when talking about the citizens’ lack of awareness about the sport of cycling and how to deal with its practitioners. He noted that it is easy for a reckless driver to harm a group of players cycling in a row, push a player with his hand, or throw cans and bottles at them.

Anoud found during the period of banning the use of vehicles due to the spread of the Coronavirus, an opportunity to use the bicycle and demonstrate its importance to people, as many used it for their transportation or exercise. She hoped that the drivers would form awareness about this sport and a feeling of its drivers, after its importance appeared during the ban.

Now that normal life returns to the streets, cyclists return to their fear of cars, and Anoud explains that whoever wants to go out on the street must have car-handling skills, and whatever his cycling skills are, he will remain at risk of accidents.

Al-Qatanani says that the GAM priority is to provide suitable and equipped sidewalks for pedestrians, and to work on creating a transportation system that will later reduce the number of cars, so that it can then allocate lanes for riders, by reducing car lanes. She also indicates that the Municipality is working on current plans to find a bicycle lane on the streets of wide sidewalks: “Like the streets of Jabal Al-Hussein area with wide sidewalks that allow part of it to be cut and converted into cycling lanes. The same applies to Munther Al-Masry Street in Abdoun, where we can add a path for bikes in it because it is a broad service street”.

At the end of her speech, Qatanani stressed that “the Municipality is working to make Amman an environmentally friendly city, starting with sidewalks for walking, jogging, and cycling”.