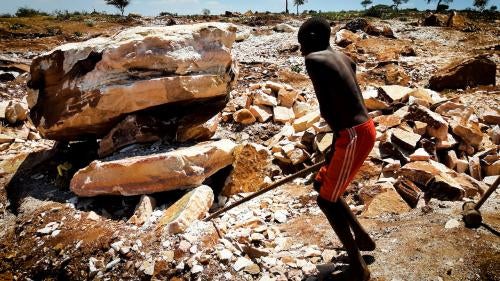 (Kampala) – The unprecedented economic impact of the Covid-19 pandemic, together with school closures and inadequate government assistance, is pushing children into exploitative and dangerous child labor, Human Rights Watch and Initiative for Social and Economic Rights (ISER) said in a report released today ahead of the World Day against Child Labor on June 12, 2021. The Ugandan government and donors should prioritize cash allowances to protect children’s rights and enable families to maintain an adequate standard of living without resorting to child labor.

The 69-page report, “‘I Must Work to Eat’: Covid-19, Poverty, and Child labor in Ghana, Nepal, and Uganda” was co-published by Human Rights Watch, ISER in Uganda, and Friends of the Nation in Ghana. It examines the rise in child labor and poverty during the Covid-19 pandemic, and the pandemic’s impact on children’s rights. Children described working long, grueling hours for little pay after their parents lost jobs or income due to the Covid-19 pandemic and associated lockdowns. Many described hazardous working conditions, and some reported violence, harassment, and pay theft.

“The pandemic has hit Ugandan families hard, forcing many children into exploitative work,” said Angella Nabwowe Kasule, programs director at Initiative for Social and Economic Rights. “The government should immediately get children out of precarious labor situations and increase cash assistance to families to prevent further increases in poverty and child labor.”

The report is based on interviews with 81 working children, some as young as 8, in Ghana, Nepal, and Uganda. In Uganda, ISER interviewed 32 children ages 9 to 16 who worked at gold mines, stone quarries, fisheries, in agriculture, in construction, and selling items on the street.

The vast majority of children interviewed for the report said that the pandemic and associated lockdowns had a negative effect on their families. Many entered the workforce for the first time to support their families. Some said they decided to work because their families didn’t have enough food. “I started working because we were so badly off,” a 13-year-old girl told ISER. “The hunger at home was too much for us to sit and wait.”

Some Ugandan children described work that was clearly hazardous. At stone quarries, children reported injuries from flying stones, including sharp particles that got into their eyes. Children showed researchers cuts from the “slashers” they used to clear fields or the sharp edges of sugarcane stalks. Others described carrying heavy loads.

Most earned less than 7,000 shillings per day (US$2). Two-thirds said that their employer sometimes refused to pay them or paid less than was promised. A 12-year-old girl who typically earned only 5,000 shillings (US$1.39) a week crushing stones at a quarry said that her employer often paid her even less if he wasn’t satisfied with the size of the stones. Some children said that their earnings did not always provide enough money for food.

School closures worldwide have also contributed to an increase in child labor. President Yoweri Museveni ordered schools closed on March 18, 2020, shutting out half the children interviewed. But the others had dropped out before the pandemic, in most cases because their family could not afford school fees.

The government provided self-learning home packages and educational broadcasts on television and radio, but none of the Ugandan children interviewed had access to remote learning. Only 43 percent of the Ugandan population had electricity in 2018.

Most children interviewed wanted to return to school, but many said that school fees were a significant barrier. Some were resigned to never returning to school, and at best, working to support the education of younger siblings.

The report focused on Ghana, Nepal, and Uganda because they have made significant progress in reducing poverty and child labor, and as “pathfinder” countries, have committed to accelerate efforts to eradicate child labor by 2025 in line with the United Nations Sustainable Development Goals. However, each has lagged behind their regional peers in using cash allowances to address the Covid-19 crisis.

Leading up to the pandemic, cash allowances to families with children contributed to a significant decrease in child labor globally. According to the International Labor Organization, the number of children in child labor decreased by approximately 94 million between 2000 and 2016, a drop of 38 percent.

Before the Covid-19 pandemic, Uganda allocated approximately 0.14 percent of its GDP to cash allowances, far less than its East African neighbors, such as Kenya (0.4 percent) and Rwanda (0.3 percent). Its total social safety net spending was approximately half the regional average in Sub-Saharan Africa, with approximately 80 percent coming from outside donors.

In response to the pandemic, Uganda slightly increased its budget for social protection, but neither of its main direct cash transfer programs target households with children.

“For many families with children, government assistance in response to the pandemic has been far too little,” said Jo Becker, children’s rights advocacy director at Human Rights Watch. “Uganda and its donors should scale up cash allowances to families and eliminate the school fees that deprive many children of their right to education.”