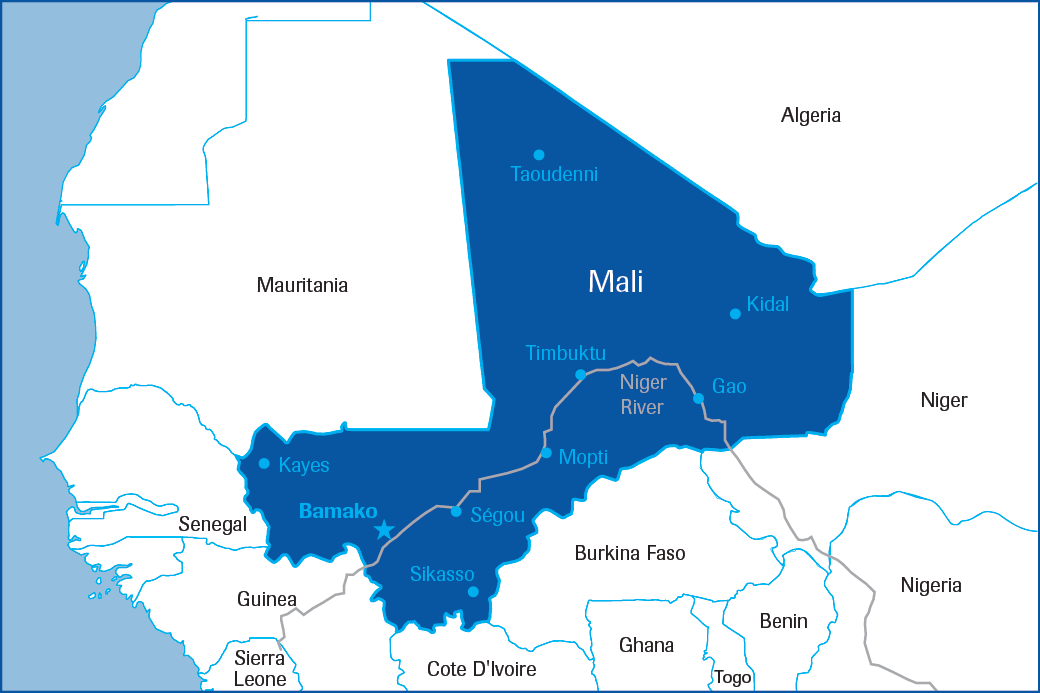 From January to April 2012, Mali underwent the fourth Tuareg uprising of its post-colonial history, an Islamist takeover of all the northern cities and an improvised military coup. This succession of destabilising events came as a surprise to all international observers, who long considered this country as a ‘poster child for democracy in Africa’. In their view, deposed President Amadou Toumani Touré (ATT) appeared to shoulder the prime responsibility for the 2012 crisis. And while it is without doubt accurate to say that the former leader of Mali contributed in large part to the political degradation and worsening security conditions of the country, the root causes of the conflict are to be found elsewhere, predating ATT’s presidency.

This paper, the first report of the new Maghreb-Sahel Programme of the Clingendael Institute’s Conflict Research Unit, aims to explore the most prominent root causes and global influences that account for the 2012 crisis. It addresses the local issues that have played a significant role in undermining peace and security and explores the international dynamics that have contributed to this malaise. On the basis of that analysis, the paper seeks to give the many local and international bodies now engaged in the Sahel region, and in Mali in particular, food for thought as to what political, social and developmental challenges remain to be addressed so as to prevent a recurrence of armed conflict and institutional collapse. The paper should serve as a clear warning to all those who believe the international community can move on once the immediacy of crisis management in Mali has ended.

When Mali gained independence from France in 1960, the new government had to assert its authority on a large territory, including desert regions where Tuareg and Arab communities directly challenged its authority. This already difficult task proved to be even more challenging because of the deep resentment of Malian state officials towards sections of the northern populations whom they regarded as the main obstacle to national unity. The southern elites resolved to focus their political and economic efforts on the ‘useful’ south of Mali, gradually marginalising the north of the country and imposing military rule on those regions.

Simmering and historically rooted distrust had led to four Tuareg and Arab uprisings following independence: in 1963, 1991, 2006 and 2012. Even though peace agreements were signed and multiple demobilisation programmes implemented, none of them succeeded in normalising the relationship between the north and Bamako. Those repeated failures are, in part, a direct consequence of the Malian state’s strategy of taming the north. In order to prevent one group from gaining too much influence and posing a threat to central state authority, Bamako sought to divide the northern ‘front’ and exploit interethnic and sectarian tensions to impose its authority. Among the instruments of this strategy were the use of electoral zoning to favour certain Tuareg tribes over other groups or the Arab community. Bamako also regularly employed ethnic-based vigilantes (Songhay and Fulani Ganda Koy or Ganda Iso, and today the Groupe d’auto-défense Touareg Imghad et allies (GATIA) movement) to counter the Tuareg and Arab threat.

The direct and long-term consequences of this counter-insurgency strategy were deep animosity between northern populations, fierce resentment by communities towards the central state, and a very heterogeneous distribution of needs and demands that made inclusive peace talks and agreements far harder to reach. Indeed, Tuareg, Arab, Songhay or Fulani northern people all have different political agendas, and do not share the same culture, political history, languages or traditions. They do not all recognise ‘Azawad’ as their common land, or the necessity of independence. Arabs and Tuaregs for instance, while not always opposed to Bamako, have long been in confrontation with the central state; the Fulani and the Songhay, on the other hand, have been far closer to Bamako, and have worked alongside the Malian regime for decades. The divisions between northern populations is a crucial element in understanding the difficulty in converting post-conflict stability into anything like sustainable peace.

Furthermore, intra-Malian tensions and community distrust have been aggravated by foreign interference and other, more passive, forces who have served to aid and abet tensions in the north. By taking advantage of the general weakness of the Malian state, these external actors have sought to build their influence primarily in the north.

The north of Mali indeed became a prize in the eyes of countries like Libya and Algeria, two regional powers that have long sought to push their agenda for Sahelian influence as a step to broader geopolitical primacy. Colonel Qaddafi attempted to garner the support of Malian Tuareg communities in order to fulfill his ambition of forming a League of Grand Sahara Tribes and impose himself as a continental leader. Alternating between promises of support for Tuareg rebellious endeavours and mediation in the aftermath of uprisings, he managed to establish Libya as a key player in Mali. Algeria, seeing the north of Mali as its natural backyard and a privileged territory in which to channel its own national insecurity (namely, Islamist terror groups), used its role as a regional counter-terrorist leader to assert influence in the northern regions. Over time, it challenged Libya as mediator in the aftermath of Tuareg uprisings.

Ethnic manipulation and foreign meddling were not the only signs of a state whose presence in Mali’s north was partial, partisan and unpopular with many groups. Foreign charitable organisations, among them Arab-speaking non-governmental organisations (NGOs) and Islamic preaching movements, proliferated. Playing the role of social and security providers in the absence of a functioning state, Middle Eastern NGOs spread their own version of Islam within the north. This diffusion of new ideologies – mostly challenging the tradition of religious tolerance and Islamic syncretism cherished by southern populations – added another layer of tension and misunderstanding between the north and south of Mali. Southern populations have indeed held the northern tribes, especially the Arab and Tuareg, responsible for the growing influence of radical Islamic doctrines.

In the wake of the first hostage-taking activities in the Sahel, and the subsequent increase in attention on the country by Mali’s Western partners, several international security and development programmes have been implemented. However, their exclusive focus on fighting terrorist and security threats in the Sahel, with limited consideration for other civilian issues such as economic development or social grievances, turned these programmes into accelerators of discontent and emblems of the negligence of public needs in the north. Moreover, weak ownership of these programmes by Malian counterparts, local embezzlement and a lack of regional cooperation have weakened the overall results of these efforts.

AfricaArabsColonialismconflictsdemocracyethnicFulanihistoryMalimilitaryTuaregwar
Next article 14 African Countries Forced by France to Pay Colonial Tax For the Benefits of Slavery and Colonization By: Mawuna KOUTONIN

First Argentina and Now the EU - Who Will Be ...