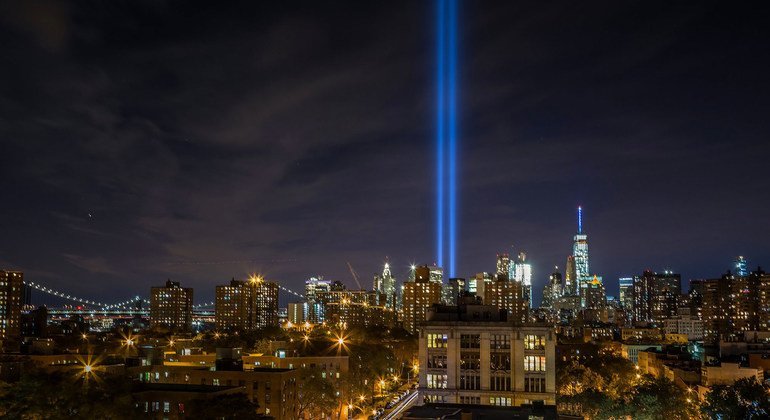 Almost 3,000 people died in the attacks on 11 September 2001, which saw four planes hijacked by members of the Al-Qaeda terror group fly into US targets, including the two skyscrapers in Manhattan’s Financial District.

Memorial ceremonies were held across the United States on Saturday, including the three sites of the attacks: a plane was also flown into the Pentagon, the headquarters of the US Military, and another crashed into a field in Pennyslvania, after passengers wrested back control from the hijackers.

More than 400 first responders were killed in New York that day, the majority of them firefighters. In a statement, Mr. Guterres honoured those put themselves in harm’s way when they headed towards the burning Twin Towers, “with many making the ultimate sacrifice, exemplifying the very humanity and compassion that terrorism seeks to erase”.

Describing the day as one “seared in the minds of millions of people around the world”, Mr. Guterres recalled that the thousands of victims, and thousands more injured in the “cowardly and heinous “ came from some 90 countries.

Paying tribute to the survivors who, he said, have had to overcome physical and emotional scars to get on with their lives, Mr. Guterres pledged the UN’s continued solidarity with the people of New York City, the United States of America, as well as all victims of terrorism everywhere around the world.

Mr. Guterres also recalled the solidarity, unity and resolve expressed 20 years ago by the international community. The then Secretary-General, Kofi Annan, condemned the attacks on the day they happened, stressing that no just cause can be advanced by terror, and the members of the Security Council unanimously called on all countries to work together to bring the perpetrators to justice.