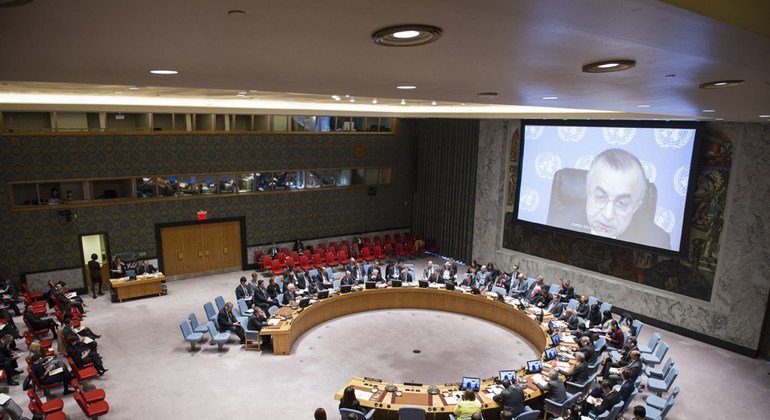 Zahir Tanin, the Secretary-General’s Special Representative and head of the UN Interim Administration Mission in Kosovo (UNMIK), told the Security Council on Friday, that Kosovo is especially vulnerable to threat of a wider outbreak.

“Even as heroic efforts are being made by medical personnel, the healthcare resources of Kosovo are stretched thin”, he said, during his first regular briefing to the 15-member Council conducted under the organ’s new videoconference meeting procedure.

Anxiety, divisions and ‘no confidence’

The Special Representative commended the swift action taken by public health authorities to introduce measures to curtail the spread of the virus.

However, he expressed concerns over internal political instability, marked by a parliamentary no-confidence vote which rebuffed Kosovo’s coalition Government on 25 March, following a dispute over whether to declare a state of emergency to combat the coronavirus.

“It is an unfortunate feature of the present circumstances in Kosovo that political divisions have distracted the attention of many leaders away from the health crisis”, said Mr. Tanin. “These divisions have served to reduce public trust in political leadership during a time of heightened public anxiety and uncertainty.”

He called for more resources for the most vulnerable in Kosovo, while welcoming new lifelines in the form of €100 million in loans from the European Union and a $56.5 million emergency loan from the International Monetary Fund (IMF).

Mr. Tanin outlined several critical elements needed to defeat COVID-19 in Kosovo. Those include a focused Government, a mobilized population and resources driven by strong leadership.

“I urge political leaders…to focus on unifying their energy while putting personal and political agendas aside”, he stressed.

Hailing several recent strides in “cross-community” and “cross-boundary” cooperation, he said those include a better working relationship between health authorities in Pristina and the Serb capital Belgrade, which facilitated the donation of testing kits from Serbia and free movement of essential goods.

In another positive development, the 100 per cent tariff previously imposed on goods from Serbia and Bosnia-Herzegovina into Kosovo was initially removed.

The Special Representative also outlined how UNMIK and the UN Kosovo Team are adapting their work during the pandemic, providing direct support to vulnerable communities and assisting local health authorities.

UN staff are responding to a 36 per cent increase in domestic violence – among other alarming new challenges – while disseminating public health information and closely monitoring human rights.

UNMIK is taking all possible precautions to protect its staff, said Mr. Tanin, noting that no case of COVID-19 infection has been registered within the Mission to date.

“Only through solidarity and unity of effort can we succeed in meeting and overcoming this enormous challenge,” he said. “We stand together with the people of Kosovo in fighting the COVID-19 pandemic.”

FROM THE FIELD: Painting the post-pandemic world in Senegal |