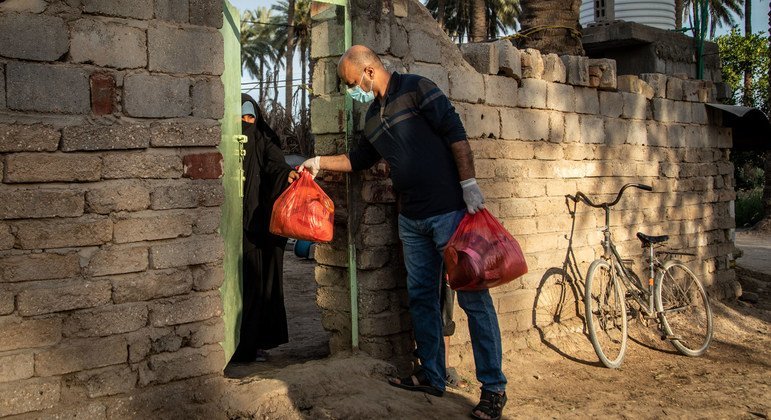 Jeanine Hennis-Plasschaert briefed ambassadors on latest developments, including the appointment last week of new Prime Minister Mustafa al-Kadhimi, and the majority of his 22-member cabinet, following months of political infighting and stalemate.

Although the pandemic has quieted months of corresponding protests, which saw Iraqis taking to the streets to call for an end to corruption, unemployment and poor public services, the UN envoy hoped that the new government will be guided by their demands and aspirations, for the good of the country.

“I remain convinced that a more just, prosperous and resilient Iraq can emerge from the current compounded crises. But for that to happen, political will is fundamental”, said Ms. Hennis-Plasschaert, who also heads the UN Assistance Mission for Iraq (UNAMI).

“Iraq must move away from endless crisis management towards a more productive approach, building resilience at both the state and society level. Short-term political and private calculations do not serve Iraq’s long-term interests, on the contrary. And yes, the challenges are many; but so are the opportunities.”

SRSG Jeanine Hennis-Plasschaert to UNSC: I remain convinced that a more just, prosperous and resilient #Iraq can emerge from the current compounded crises. But for that happen, political will is fundamental. pic.twitter.com/HedJ9EAAjV

The UN envoy noted that the new Prime Minister’s priorities include tackling the pandemic, reforming the security sector, strengthening the economy, and fighting corruption, which she characterized as “perhaps the greatest source of dysfunction” in Iraq.

“These worthy aspirations must be turned into action urgently,” she said.

“And let me emphasize: Iraq does not have the luxury of time. Nor can it afford destructive petty politics”.

Iraq has long battled political turmoil but also social, economic and security crises. COVID-19 has added to these challenges by bringing commercial activity to a standstill and putting the livelihoods of millions in peril.

Oil-dependent Iraq has also seen monthly revenues from this commodity drop from $6 billion to $1.4 billion between February and April. Additionally, the economy is projected to contract by nearly 10 per cent this year, with poverty rates rising to around 40 per cent.

As Ms. Hennis-Plasschaert pointed out, these developments are occurring at a time when it will become even harder for Iraq to access international funding. The need to broaden its revenue base could not be more apparent.

“Time and again, it has been made clear that Iraq should reduce its oil dependency; repair and upgrade critical infrastructure; temper its ballooning, inefficient public service; build viable and responsive state institutions; combat patronage and clientelism; fight corruption, and incentivize the domestic private sector while attracting foreign investment,” she stated.

Ms. Hennis-Plasschaert reported that although “inflammatory rhetoric” and a “pattern” of attacks and counter-attacks have tapered off in recent weeks, they remain a constant threat.

“And I can only emphasize: the way armed elements, armed entities, with differing ties to the State, choose to act in this moment will determine how Iraqis – and, indeed, many others — will perceive them,” she added.

“Once again, Iraq cannot afford to be used as a theatre for different power competitions and/or proxy conflicts”.

The UN official also warned against the resurgence of violent extremism, stating that the best way for the Government to counter ISIL and other groups is to provide for citizens by addressing the root causes of their grievances.