That accord known as the Conakry Agreement, includes a related political road map set out by the Economic Community of West African States (ECOWAS).

Competing priorities are fuelling tensions between President Sissoco Embaló, announced the winner of the run-off on New Year’s Day, whose new Government is focused on consolidating power, and efforts by the African Party for the Independence of Guinea and Cape Verde (PAIGC) to contest a 29 June parliamentary vote that approved the programme of the Nuno Nabiam Government.

While the President has offered to form a broad-based Government with Nuno Nabiam as Prime Minister, the top UN official said the prospects of a breakthrough are low, given PAIGC’s strong opposition to joining the Government under the current circumstances.

Concerns over the 26 July raid on Radio Capital FM, considered allied to the opposition, as well as arbitrary arrests, intimidation and detention of those perceived as opposing the administration, have also compounded the divisions.

Amid such paralysis, the UNIOGBIS mandate is unlikely to be fully implemented before the Office draws down by 31 December, she said.

Nonetheless, she said efforts are ongoing to reconfigure the UN presence in a way that would allow the Country Team to continue the critical peacebuilding activities of political dialogue, confidence-building measures, reforms and combatting drug trafficking and transnational organized crime.

In addition, a comprehensive action plan is being defined to extend technical support to specialized commissions towards achieving cross-party consensus.

“My plan to establish a high-level platform bringing together relevant international partners and national authorities to discuss, sustain momentum and accompany the country’s reform efforts is progressing”, she assured. Following the Office’s closure, the platform would continue under the leadership of the resident coordinator.

“Continuing our efforts in support of the country will remain crucial”, she stressed adding that serious funding will be needed to avert a financial cliff.

The Peacebuilding Commission’s role in maintaining international attention on Guinea-Bissau will also be of utmost importance.  “The recent political crisis linked to the electoral dispute is self-explanatory of the structural weaknesses of the country”, she said. 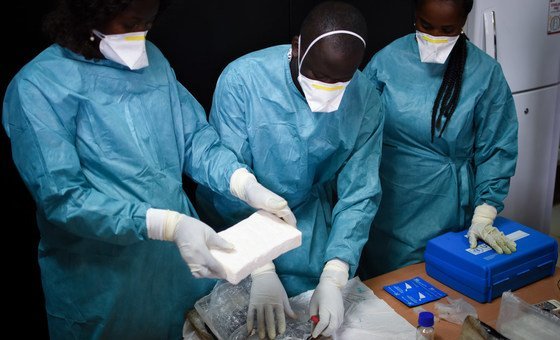 Hard-won achievements in 2019 – in particular, the “CARAPAO” and “NAVARA” operations, which led to the seizure of roughly 3 tonnes of cocaine – are proving difficult to advance.

Noting that security sector reform is essential to resolving the chronic problem of instability, she said UNODC assistance will focus on strengthening institutions to fight corruption and enhance criminal justice.  These efforts will be carried out under the national strategic plan on drug trafficking, which provides an integrated approach to reforming the entire security system.

Going forward, she said Guinea-Bissau needs renewed international commitment.  “Political will and long-term assistance, backed by sufficient funding, are needed more than ever”, she said.  UNODC will continue to closely monitor the drug trafficking and organized crime situation, delivering technical assistance supported by an extensive team on the ground and maintaining its readiness to offer more formal advisory services.

She said the UNODC regional office in Dakar will also provide technical support, in cooperation with the United Nations Office for West Africa and the Sahel (UNOWAS).

CrisisenactGuineaBissauleadersPoliticalreformsRepresentativeurges
Previous article Belarus: UN chief following post-election developments ‘with great concern’ |
Next article People Can Mourn Me The Way They Like When I Die, Says Obasanjo

In Afghanistan, women take their lives out of desperation, Human ...