The COVID-19 outbreak is posing unprecedented challenges to police and other law enforcement agencies worldwide, such as ensuring public safety, while taking care of police officer health and well-being. The challenge is even greater in peacekeeping contexts, where both police and public health systems are either weak, or wrecked by the years of armed conflict. 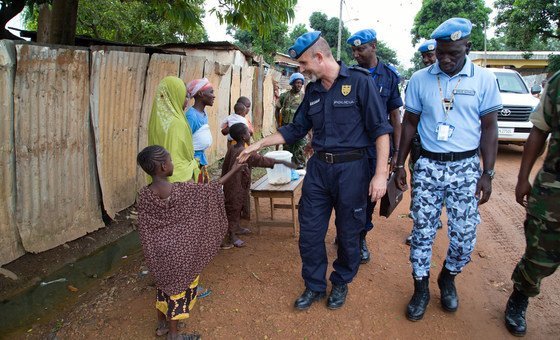 Luis Carrilho, whose official title is UN Police Advisor, started by explaining how the COVID-19 pandemic is affecting the work of his officers.

“Like medical staff, police officers can’t telecommute, so they are also on the frontline. Our first responsibility is to stay healthy and safe, so we need to have, not only the equipment, but also the attitude to protect ourselves.

This is because, by protecting ourselves, we can protect others. We need to make sure that we aren’t contaminating others and that we are protecting the most vulnerable, alongside the host police force.

If you think of the virus as a storm, not everyone is riding it out in the same kind of boat. Some people have better protection, access to better goods. The most vulnerable don’t. Our goal is to protect those people – children, the elderly, victims of crimes, ethnic minorities – who are always more affected by this kind of crisis. We also try to provide the space to act for other colleagues, particularly humanitarian workers, who are playing a key role in assisting communities in need.

With travel now restricted, our police officers are spending longer periods away from their family, and the risk to their safety has increased. Some officers have been infected, recovered, and returned to the frontline. This shows that, for them, it is an honour to serve under the flag of the United Nations and make a difference, particularly to the most vulnerable.

To what extent are UN Police officers enforcing lockdown restrictions?

MONUSCO Police, together with the Congolese National Police, train 61 road traffic police officers in North Kivu on preventive measures to prevent the spread of COVID-19..

In the countries where we work, we have a set of principles that we always abide by, and we respect the law: no one is above the law. We also implement measures that contribute to the protection of communities, whilst always respecting human rights.

We always take a strong community policing approach, and the populations we work with understand that the measures are being put in place for security reasons. In the Democratic Republic of Congo, for example, United Nations Police work side by side with the Congolese police, on awareness raising campaigns, but also distributing masks, and sanitizers to those who are in need.

Sadly, this is not the first virulent disease that we have had to deal with. During the Ebola epidemic in the Democratic Republic of Congo, we were part of the task force set up to cope with it, alongside the Congolese authorities and UN agencies. Of course, when the police are called, it is often because there is a conflict taking place, and there will always be someone who is not happy. But our job is to be prepared for these situations, and provide communities with the answers they need.