In an update on the measures taken to strengthen the safety and security of UN peacekeepers, Jean-Pierre Lacroix reported that since 1 January of this year alone, 15 peacekeepers lost their lives due to malicious acts.
“One peacekeeper lost continues to be one too many”, he said, stressing that “attacks against peacekeepers can constitute war crimes; are a huge impediment to the pursuit of peace; and an added constraint for the effective implementation of UN Security Council mandates”.
Moreover, vehicle accidents and illnesses, are also causing fatalities, and can significantly affect the ability of peacekeepers to deliver on their mandated tasks.

The peacekeeping chief said the UN Action Plan has enabled “significant progress” in strengthening the safety and security of blue helmets.

“It contributed to a sustained decrease in peacekeeper fatalities due to malicious acts, from 59 in 2017 down to 13 in 2020”, he said.

Mr. Lacroix told the Ambassadors that UN peacekeeping has revised guidance, processes and tools; strengthened policy and procedures; and increased the use of technologies, which have “proved a key multiplier to the enhanced preparedness and capabilities of peacekeepers”.

“We have also made progress supporting host countries…to bring perpetrators of crimes against peacekeepers to justice”, including in the Central African Republic (MINUSCA), Mali (MINUSMA), and the Democratic Republic of Congo (MONUSCO), he said.

Safety, security and performance are “mutually reinforcing and go hand-in-hand”, explained the UN peacekeeping chief, stressing that their safety is “key” to their performance. However, many factors “continue to impede the safety and security of our peacekeepers on the ground”. 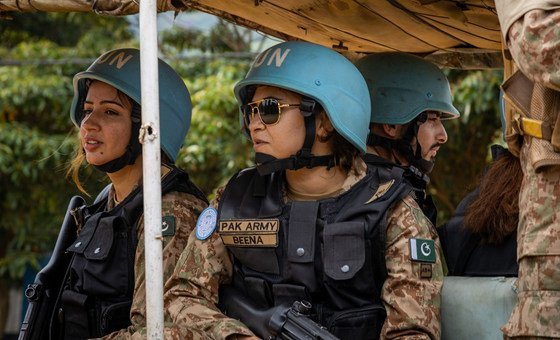 Wherever possible UN peacekeeping is seeking to address challenges made stark by this year’s spike.

“The Secretariat is planning on doubling up its efforts on safety and security going forward”, said Mr. Lacroix.

“Missions are monitoring and countering disinformation, misinformation and hate speech, including in the context of this pandemic”, he said.

To complement these efforts, the UN peacekeeping chief advocated for “coordinated actions by Member States, including the Security Council, in line with Security Council resolution 2518” to better address continuing gaps and shortcomings that persist in the field.

In closing, Mr. Lacroix called for support in providing good personnel, particularly more female peacekeepers, who are “critical” to strengthen mission performance, and cutting the flow of IED precursors to prevent their manufacture, particularly in the Sahel region.

He also underlined the importance of deploying uniformed personnel “without caveats” and political and technical support to guarantee accountability for crimes against peacekeepers.

“And finally, avoiding cuts to the budgets of Headquarters and missions will help us to ensure continuity of our efforts to strengthen the safety and security of UN Peacekeepers”, the UN peacekeeping chief concluded.

Also addressing the Council, the head of the UN Department of Operational Support, Atul Khare, said that early warning technologies have proven effective in enabling missions that are regularly under attack to achieve greater security for their personnel.

For example, incoming rockets and mortars were detected in advance of impact during an attack on the MINUSMA Camp in Kidal region on 25 April, which enabled staff to take refuge in bunkers and contributing to lives saved.

Though both require high priority attention, he noted the distinction between casualties from accidents and those from “malicious acts” and called for the upgrade of situational awareness.