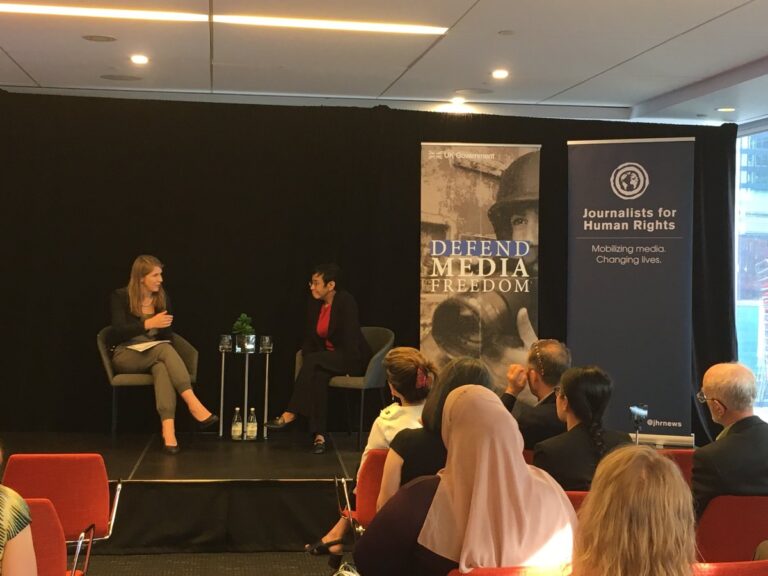 Maria Ressa and Rachel Pulfer at the ‘Defend Media Freedom’ panel organized by the British Consulate and JHR in 2019. Photocredit: JHR

The verdict misapplies Philippine law, while contradicting international law and the amicus brief submitted to the court by United Nations Special Rapporteur on the Right to Freedom of Opinion and Expression David Kaye.

The following illustrates that there is no legal basis for the case. First, the charges apply retroactively to an article that was published three months before the Cybercrime Prevention Act of 2012 was passed. Second, the charges were filed seven years after publication of the article. In the Philippines, there is a one-year limitation period for libel; this case is far outside that. Third, the cyberlibel law violates international human rights law and Filipinos’ right to freedom of expression. The article was a fair and true report made in good faith. Fourth, the charges are based on a law that violates international standards in treaties which the Philippines are signatories to, in that they expect Maria Ressa to be imprisoned for allegedly libelous speech.

This is a politically-motivated attack designed to undermine Rappler’s ability to function, and intimidate other journalists and media organisations who dare to report with integrity in the Philippines. It represents a corruption of the courts for political purposes, and sets a dangerous global precedent that is a blow for press freedom everywhere.

JHR has had the privilege of working with Maria Ressa on a number of occasions. Our successful program training both journalists and social media users on how to identify and combat misinformation was directly inspired by her work. She is a journalist of peerless integrity and a powerful voice for truth, which is precisely why she is being targeted in this despicable way. For all of these reasons we call on the Court of Appeals to revoke the conviction. Further, Maria Ressa and Rappler also face several other spurious charges; we call for them to be dropped as well.

No journalist should face jail time for doing their job; that we have reached this point is a tragic statement on the state of press freedom in the Philippines and sets a dangerous precedent for efforts to uphold larger media freedoms worldwide.

You can support Maria Ressa by joining Rappler here,

Or donate to protect journalists through the Press Freedom Defense Fund of the Committee to Protect Journalists (CPJ) here,

Kurdish Authorities Clampdown Ahead of Protests

Attacks on education during times of conflict must stop: UN chief |