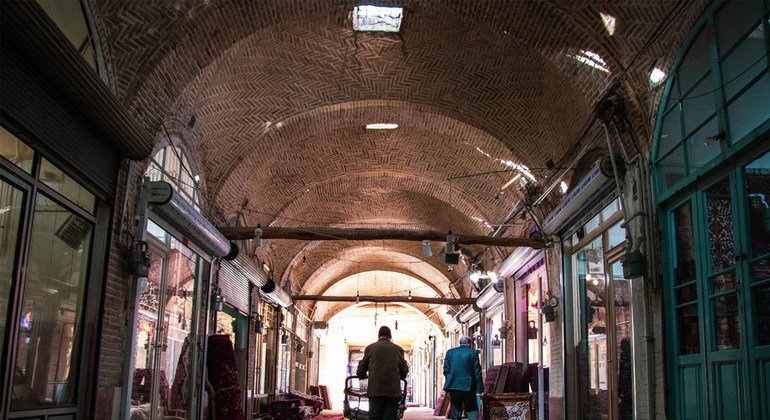 They said Narges Mohammadi appears to have contracted the virus in Zanjan Prison, located in the capital, Tehran, where she is serving a 16-year sentence stemming from her work on human rights.

“We are extremely concerned for Ms. Mohammadi’s well-being. We previously raised concerns that she and other individuals in Iranian prisons are at great risk if they contract COVID-19 and we called for their immediate release”, the experts said on Wednesday.

“For those with underlying health conditions, such as Ms. Mohammadi, it may have life-or-death consequences. The Iranian authorities must act now before it is too late.”

Ms. Mohammadi showed the first symptoms of COVID-19 on 29 June, according to the experts. Her condition deteriorated and she suffered a loss of consciousness on 5 July.

The rights experts said Ms. Mohammadi should receive the results of the COVID-19 test she took, three days later, and she also should be moved to a hospital for proper care. One of her cellmates has tested positive for the disease and others have displayed symptoms.

“We also deplore the publishing of a video by State-affiliated media which claims to portray Ms. Mohammadi receiving a medical check-up by a doctor, reportedly to suggest that she is in good health. This video represents a violation of Ms. Mohammadi’s privacy rights and has no value as its content cannot be verified in any way”, they added.

The UN experts are also concerned that there may be more COVID-19 cases in Iranian prisons, as inmates previously released on furlough have returned to prison, amid a second wave of COVID-19 in the country.

While they had previously commended a government policy granting temporary release to prisoners, as a means to reduce the disease’s impacts in jails, the experts were worried that human rights activists and others held without sufficient legal basis, had not benefited.

“Ms. Mohammadi should not be in prison in the first place”, they said. “The Working Group on Arbitrary Detention found that her detention is arbitrary and called for her immediate release in 2017. Not only do the Iranian authorities continue to imprison her, they have in the past year denied her contact with her family and are also seeking to prosecute her under new charges in order to continue her unlawful imprisonment.”

“We yet again call on Iran to immediately release Ms. Mohammadi, as well as all others who are currently denied their right to liberty in contravention of Iran’s obligations under the International Covenant on Civil and Political Rights.”

The 16 experts calling for her release were appointed by the UN Human Rights Council. Their mandates cover specific country situations or thematic issues.

They are neither UN staff, nor are they paid by the Organization.

Nigerian Youths And the 2019 General Elections