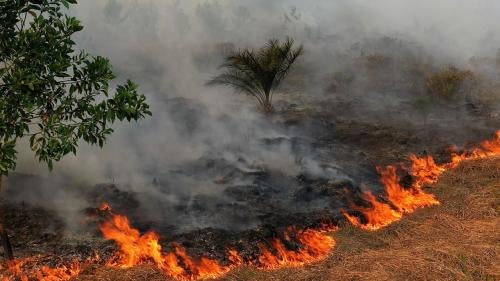 (Jakarta) – The harm a palm oil plantation in western Kalimantan, Indonesia, is causing to the surrounding communities and the environment demonstrates the government’s failure to enforce its own policies and laws, Human Rights Watch said in a report released today. There has been no improvement in government protection of residents and the land, and in fact new laws could facilitate the abuses.

The 71-page report, “‘Why Our Land?’: Oil Palm Expansion in Indonesia Risks Peatlands and Livelihoods,” examines the conduct of PT Sintang Raya, a subsidiary of South Korean Deasang Corporation, in three tidal villages in West Kalimantan province. Human Rights Watch found that the company has established and expanded its plantations in peatlands, which help to address climate change, without genuine consultation with local residents and without adequate compensation for loss of their farmland or livelihoods. Police have harassed, intimidated, and prosecuted villagers who have resisted or protested.

“Indonesian authorities are permitting palm oil companies to destroy peatlands and cause other environmental harm with scant regard for the rights of local communities or the environmental consequences,” said Juliana Nnoko-Mewanu, senior researcher on women and land at Human Rights Watch and author of the report. “The Indonesian government should ensure that companies comply with laws to protect residents’ land rights, as well as environmental laws, and do their part to address the climate crisis.”

The Indonesian government is failing to protect the rights of communities living on or near peatland converted to commercial agriculture. It is also permitting the widescale destruction of one of the world’s most important carbon sinks, Human Rights Watch said. Peatlands in Indonesia store an estimated 80 billion tons of carbon, about 5 percent of all carbon stored in soil globally. Indonesia, the world’s largest producer of palm oil, has cleared large swaths of its natural forests, including forested peatlands, to make way for oil palm plantations, significantly increasing Indonesia’s greenhouse gas emissions.

The Indonesian government should strengthen land rights of rural communities. It should investigate and sanction palm oil companies that have not complied with laws on land acquisition and sustainable environmental management, and are harming the livelihoods of local communities, Human Rights Watch said.

Human Rights Watch found that the loss of access to farmland and forests to PT Sintang Raya’s plantations had resulted in loss of livelihood opportunities and increases in poverty and food insecurity, which may pose a threat to life and health, and to the wellbeing of communities.

“More than 100 people, including people from other villages, went to [PT Sintang Raya] to complain,” said a 48-year-old woman in Seruat Dua. “[PT Sintang Raya] didn’t talk to me, but they took my land. We complained. We even went to regency authorities in Kubu. We reported to the regent police, and still they did nothing.”

Residents of the three villages examined include people who moved there since the 1970s under the government’s transmigration program, which transferred families from Java and other densely populated islands to less densely populated areas. The majority of transmigrants have titles to their land, but most other farmers do not.

Villagers contest the validity of PT Sintang Raya’s government-issued permits. Those interviewed said that neither the government nor the company adequately consulted or compensated them for loss of their farmland and livelihood before the government issued a concession permit in 2008 or during later expansion of the plantations. In 2012, an Indonesian court required PT Sintang to return land to some residents, which the Supreme Court confirmed in 2014. But the company has not returned the land and Indonesia’s Land Agency (BPN) has not enforced the judgment.

Government authorities have harassed and threatened community members who have demonstrated against the expansion of PT Sintang Raya’s plantations, carrying out mass arrests, arbitrary detentions, and abusive prosecutions. Across Indonesia, media and nongovernmental organizations have reported that laws originally enacted to sanction corporations and curb deforestation have been used to prosecute Indigenous people and community leaders who protest or resist the loss of their land.

Community members reported increased pests and saltwater intrusions since the plantations started to operate that they say have negatively affected farming and crop yields. Several said that since PT Sintang Raya’s plantations were established near their villages, rhinoceros beetles have increasingly attacked coconut palm trees, the residents’ main cash crop, causing some to lose almost all their trees. Residents also said that increased rodent populations have decimated their paddy fields. Scientific studies show a proliferation of these pests around large-scale oil palm plantations.

Residents also reported more frequent saltwater intrusion in the dry season, leading to an increase soil salinity and poor crop yield. This too is consistent with studies around coastal areas with degraded peatlands.

Several Indonesian laws and regulations protect property and land rights of people like those living in the villages studied. Other laws govern the permits required to acquire land and establish a plantation. But government regulatory mechanisms aimed at improving oil palm sustainability are weak and do not ensure accountability. In 2018, President Joko Widodo signed a presidential instruction on agrarian reform, setting up a National Agrarian Reform Team, to accelerate a program to give local communities greater control of their land. But these actions conflict with other new laws aimed at fostering investment in Indonesia that limit public involvement and government oversight.

“The national land agency in conjunction with the Presidential National Agrarian Reform Team should investigate and sanction any palm oil company that fails to meaningfully consult and compensate affected communities,” Nnoko-Mewanu said. “Indonesia is harming the rights of people in those communities, and exacerbating climate change. Everyone suffers when the government fails in its oversight.”

For selected accounts, please see below.

When police and officials held a meeting with the company in 2010, I attended. The company (PT Sintang Raya representatives) said “We have all required permits from the government, you can get 10 lawyers to sue, and we will be waiting for that.” There was no discussion about compensation or anything else.

During sosialisasi (literally, “sosialisasi” – a term used to describe informing people about and seeking acceptance for a decision or policy) they (PT Sintang Raya) said ‘this is the HGU. HGU means ownership.’ How can the government give ownership without talking to us?

Bethari, a 44-year-old woman in Olak Olak with an 8-month-old infant, said:

My husband works at the plantation. His sons and I must help him make the target. I help with the baby, I can’t leave her at home.

Aulia, a 58-year-old mother of six in Olak Olak who has five grandchildren, said:

On the land we have left we plant rice. We got seven bags this harvest, not enough for all of us. The company won’t employ my husband (because he is old). All we have is the rice that we grow. Not enough to feed all these children and grandchildren – to give them breakfast, lunch, and dinner. If there is no rice, I dig up cassava. I must be creative to feed this whole house.

In the case of PT Sintang Raya, though there is already a verdict by the Supreme Court, it still operates as if it (the verdict) is only a meaningless piece of paper. The regent at the time, Rusman Ali, said in public that the company must carry out the court ruling but it hasn’t. Legally, we have done all that we can.