The alert from the International Organization for Migration (IOM) follows reports that an airstrike on Sunday in Washhah District, in north-west Hajjah Governorate, killed seven children and two women.

Another two children and two women were reportedly injured and taken to Abs Hospital for treatment Hajjah Governorate in north-west Yemen.

Condemning the development, the UN’s Humanitarian Coordinator in Yemen, Lise Grande, said in a statement that it was “incomprehensible that in the middle of the COVID pandemic, when options for a ceasefire are on the table, civilians continue being killed in Yemen”.

The country has long been a steppingstone for migrants seeking work in the oil-rich Arabian States to the north of Yemen.

But landing points across from the Horn of Africa have become increasingly dangerous since conflict escalated in March 2015, between the forces of President Abdrabbuh Mansur Hadi – supported by a Saudi-led international coalition – and mainly Houthi militia, for control of the Arab nation.

Today, widely described as the world’s worst humanitarian crisis, fears that COVID-19 has already gained a strong foothold in Yemen have been compounded by a potential famine alert last week from the World Food Programme (WFP), as some 10 million people face acute food shortages.

“For nearly six years, Yemen has been an extremely unsafe place to be a migrant,” said IOM spokesperson Paul Dillon. “COVID-19 has made this situation worse; migrants are scapegoated as carriers of the virus and as a result, suffer exclusion and violence. In addition to the forced removals, fears about COVID-19 have led to migrants in Yemen experiencing verbal and physical harassment, increased detention and movement restrictions.”

COVID-19 restrictions have reduced the number of migrant arrivals in Yemen by 90 per cent in recent months, while also leaving tens of thousands of Ethiopians in limbo, according to IOM.

“Transportation through the country has been blocked and at least 14,500 migrants have been forcibly transferred between governorates,” it said in a statement, with at least 4,000 people stranded in Aden, 2,500 in Marib, 1,000 in Lahj and 7,000 in Sa’ada governorates.

In 2019, an average of 11,500 per month arrived in Yemen from the East African ports, according to IOM’s Displacement Tracking Matrix, in search of work in Saudi Arabia.

Although more than 1,460 cases of new coronavirus infection and 418 deaths have been reported in Yemen, the IOM official noted that the agency “and the broader humanitarian community in Yemen, are working under the assumption that the virus is widespread”.

With “most” migrants sleeping outdoors “or in unsafe abandoned buildings”, they are at greater risk of exposure to COVID-19, Mr. Dillon continued.

“They have little access to basic services like food, clean water or health care, a worrying situation given how pervasive the virus is believed to be in Yemen.” 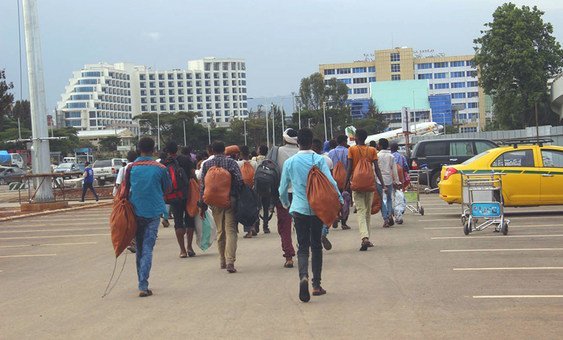 In an appeal for continued access for humanitarians throughout the country, the IOM official highlighted grave concerns about virus transmission in places where migrants are being held.

“Prior to the emergence of COVID-19 in Yemen and elsewhere, we know that many of these – many of these detention centres – are not particularly sanitary”, Mr. Dillon said. “There’s no access to some of the basics that one would need to address public health concerns such as COVID-19.”

According to Ms. Grande’s Office, nearly 1,000 civilian conflict-related casualties have been reported in Yemen in the first six months of 2020.

“Yemen can’t take much more”, she said. “There isn’t enough funding, health and water programmes are shutting, famine is stalking the country again, and people all across the country are being hit hard by COVID.”

At a pledging event in Riyadh on 2 June, donors pledged only $1.35 billion of the $2.41 billion requested to cover essential humanitarian activities until the year end, leaving a gap of more than $1 billion.

Since mid-April, 31 of 41 of critical UN programmes have been reducing or closing down for lack of funding, Ms. Grande’s Office said.