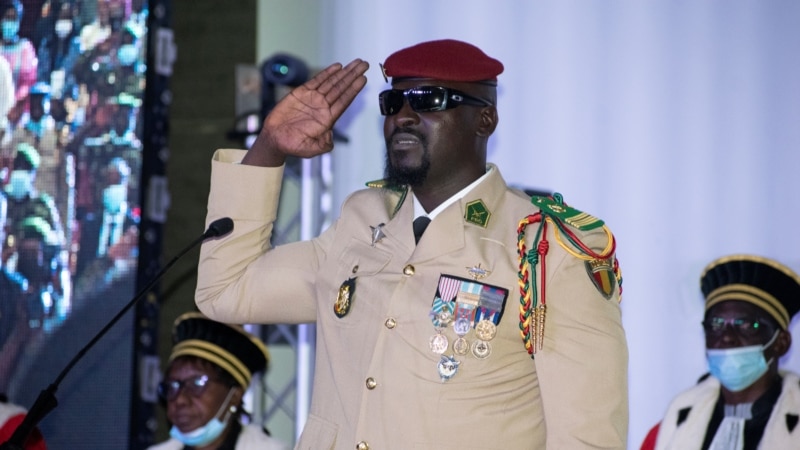 Colonel Mamady Doumbouya, who led last month’s coup in Guinea, promised to respect the country’s international commitments while transitioning to civilian rule as he was sworn in as interim president on Friday.

Doumbouya, who led the overthrow of President Alpha Conde on September 5, was sworn in by Supreme Court head Mamadou Sylla for a transition period of unspecified length.

The new interim president spoke of his commitment that neither he nor any member of the junta would stand in any future elections that the military has promised to organize after the transition period.

His administration’s mission, he said, is to “re-found the state” by drafting a new constitution, fighting corruption, reforming the electoral system and then organizing “free, credible and transparent” elections.

The swearing-in ceremony took place at the Supreme Court with local personalities and foreign envoys in attendance, including the Chinese and Russian ambassadors, as well as Doumbouya’s wife and mother.

Later Friday, in a message to the nation read on television, Doumbouya said that “in the coming days a prime minister will be appointed and then a government as well as various organs of the transition.”

He also announced the creation of a body to fight corruption.

Many Western nations limited their presence at the swearing-in to lower-rank diplomats.

Doumbouya again said nothing about how long he will remain the interim leader of the impoverished West African nation. But he promised to “respect all the national and international commitments to which the country has subscribed.”

Before the swearing-in, Supreme Court president Sylla compared Doumbouya’s task to piloting a ship “loaded with many painful events, numerous demands and immense and urgent expectations”.

He urged the new leader not to let himself be diverted “by the force of the waves of demagogy and the storm of the personality cult.”

The ceremony was held on the eve of a public holiday celebrating the 1958 declaration of independence from France.

Doumbouya, 41, will serve as transitional president until the country returns to civilian rule, according to a blueprint unveiled by the junta on Monday that does not mention a timeline.

Until then he retains the right to hire, and fire, an interim prime minister.

The September 5 coup, the latest bout of turbulence in one of Africa’s most volatile countries, saw the overthrow of 83-year-old president Conde.

The deposed leader is being held at an undisclosed location.

Conde became Guinea’s first democratically elected president in 2010 and was re-elected in 2015.

But last year he pushed through a controversial new constitution that allowed him to run for a third term in October 2020.

The move sparked mass demonstrations in which dozens of protesters were killed. Conde won re-election but the political opposition maintained the poll was a sham.

The turbulence has sparked deep concern among Guinea’s neighbors.

The coup is the second to take place in the region, after Mali, in less than 13 months.

The region’s bloc, the Economic Community of West African States (ECOWAS), is demanding that elections be held within six months and that Conde be released.

Guinea is one of the poorest countries in the world, despite abundant reserves of minerals including iron ore, gold and diamonds.