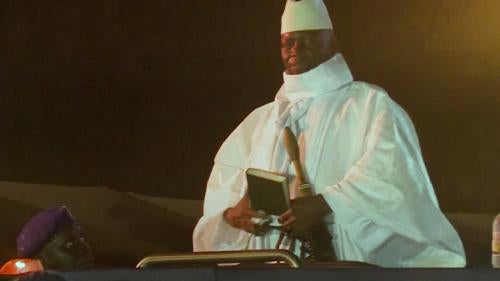 (Banjul) – Testimony before a Gambian truth commission linking former president Yahya Jammeh to numerous grave crimes during his 22 years in office should be followed by criminal accountability, Human Rights Watch said today with the release of a video, “Truth and Justice in Gambia.” On May 27, 2021, the Gambia Truth, Reconciliation, and Reparations Commission (TRRC) is scheduled to conclude over two years of publicly televised sessions.

Victims and former government officials who testified at the hearings, which began in January 2019, tied Jammeh to the killing and torture of political opponents, the murder of about 59 West African migrants, and “witch hunts” in which hundreds of people were arbitrarily detained, among other crimes. They also alleged that Jammeh raped and sexually assaulted women brought to him and personally ran a sham treatment program that forced HIV-positive Gambians to give up their medicine and put themselves under Jammeh’s personal care.

“Witnesses with firsthand knowledge have implicated Yahya Jammeh in murder, torture, rape and other terrible crimes,” said Reed Brody, senior counsel at Human Rights Watch who works with Jammeh’s victims. “Now it’s up to the Gambian government to ensure that Jammeh and his accomplices are held to account. Truth telling has made a vital contribution, but it’s not the end of the road.”

The video features key testimony from the hearings and interviews with victims.

The truth commission hearings underscored the need for a criminal investigation of Jammeh, who has lived in exile in Equatorial Guinea since his departure from Gambia in January 2017.

The commission heard from more than 370 witnesses, including former government insiders such as ministers, and police and intelligence chiefs, in addition to numerous victims.

Former members of the “Junglers,” Jammeh’s elite death squad, named the former president in a series of crimes that they said they carried out, including:

The TRRC also heard testimony from Fatou “Toufah” Jallow, the winner of the main state-sponsored beauty pageant in 2014, that Jammeh raped her when she was 19. And a protected witness testified that Jammeh hired her as a “protocol girl” to work in the executive office and promised her a scholarship, but when she refused his sexual advances, he fired her and withdrew the scholarship.

Together with Jammeh’s former protocol chief and others, they provided further evidence of a system, described in a June 2019 report by Human Rights Watch and TRIAL International, in which aides regularly pressured women to visit or work for Jammeh, who then sexually abused many of them.

Witnesses also linked Jammeh to the 2009 “witch hunts” in which “witch hunters” (or marabouts) and soldiers took hundreds of women to secret detention centers and forced them to drink hallucinogenic concoctions. Of those, 41 died in custody or shortly thereafter. The former Gambia police chief, Ensa Badjie, testified that Jammeh personally ordered him to identify “witches” in the police force. Multiple witnesses reported that soldiers and state vehicles accompanied the marabouts, and that the head of their security team was a prominent “Jungler.”

The truth commission heard evidence of Jammeh’s so-called presidential treatment program, in which HIV-positive Gambians were forced to give up their medicine and put themselves in Jammeh’s personal care, leading to over 30 deaths.

The commission documented the killing by Gambian security forces on April 10-11, 2000, of 12 to 14 student demonstrators who were protesting the killing of one student and the rape of another. Lalo Jaiteh, Jammeh’s former aide-de-camp, testified that he heard Jammeh, who was abroad, tell his vice president, Isatou Njie Saidy, to “take care of these bastards in whatever way.” Saidy then allegedly ordered the deployment of troops against the demonstrators.

The TRRC also heard evidence of the extrajudicial killings of nine death row inmates at the Mile Two Central Prison in 2012, at least three of whom had not exhausted their legal appeals. Jammeh had earlier announced on television that inmates were going to be executed.

Witness testimonies also revealed patterns of torture by Jammeh’s National Intelligence Agency as well as by prison guards and the Junglers.

Lawyers and judges also described to the TRRC how Jammeh set up a system to undermine the independence of the judiciary and the bar. Witnesses told the commission about the passage of draconian laws to stifle media freedom and testified about more than 140 arrests of journalists and media personnel.

Three alleged accomplices of Jammeh have already been detained and are facing trial abroad under the legal principle of universal jurisdiction, including two former Junglers, Michael Sang Correa in the United States, and Bai L in Germany, as well as Gambia’s former interior minister, Ousman Sonko, in Switzerland.

The truth commission hearings have been widely followed on radio and television throughout The Gambia. The Point newspaper and the African Network Against Extrajudicial Killings and Enforced Disappearances (ANEKED) published digests of each three-week session, while the international website JusticeInfo.net ran 58 articles on what it called “the event of the year 2019 in the field of transitional justice.”

One of the TRRC’s tasks is the “identification and recommendation for prosecution of persons who bear the greatest responsibility for human rights violations and abuses.” It will also make recommendations regarding reparations, reconciliation, and institutional reforms. The commission is expected to deliver its report in early July. The Gambian government will then decide how to respond to the recommendations.

Proposals in Gambia for following up on the TRRC’s accountability recommendations have centered on the possibility of a “hybrid” court with Gambian and international staff operating within the Gambian judicial system, which could help create a legal framework tailored to the prosecution of Jammeh-era crimes and build the capacity of the national justice system. Human Rights Watch urged the government to begin planning now for a hybrid court that would function in accordance with international standards to avoid delays in funding and establishing it.

Testifying before the TRRC, Neneh MC Cham, a Gambian human rights lawyer, said that the government should “implement every single recommendation. It is the last hope for many victims and their fear every day is that it is all going to come to naught, zero.” How the government responds to the commission’s recommendations is expected to be a key issue in the Gambian elections scheduled for December 2021.

“I want to see Yahya Jammeh in court, not just for what he allegedly did to my father, but for all the alleged murders, rapes, and torture,” said Fatoumatta Sandeng, spokesperson for the Campaign to Bring Yahya Jammeh and his Accomplices to Justice (#Jammeh2Justice) and daughter of opposition leader Solo Sandeng, who was murdered in custody in 2016. “We victims need justice before we can reconcile and move on.”