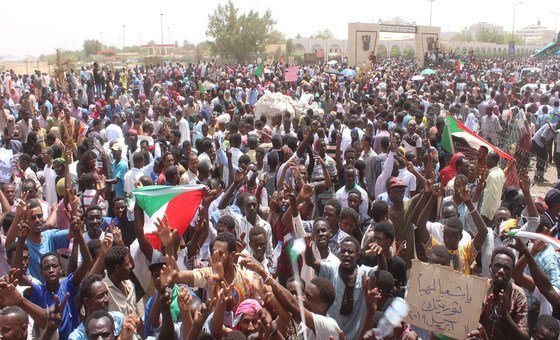 Protesters take to streets in the Sudanese capital, Khartoum. 11 April 2019, by Ahmed Bahhar/Masarib

Much has already changed for women since the protests: laws restricting freedom of dress, movement and work were repealed, and female genital mutilation was criminalized.

The transitional constitution guarantees 40 per cent representation in the parliamentary body the Transitional Legislative Council, which translates to 120 seats. However, with a history of limited female participation in the country, the UN Development Programme (UNDP) launched a programme aimed at identifying Sudan’s future political leaders, and training potential candidates.

Over a six-week period, UNDP officials visited 110 cities, villages and camps for internally displaced people, identifying 1,070 women, two-thirds under the age of 40, willing to represent their communities. This success has prompted UNDP to expand the project, supporting women to secure other national and state-level representation, and key government posts.

Read the stories of the candidates, and find out more about the challenges and opportunities for women in Sudanese politics, here.