Close
Ask a Question
Home/ Main/Ethiopia and Eritrea: A wedding, birth and baptism at the border

A peace deal between neighbours Ethiopia and Eritrea ending two decades of tension has transformed the border areas, reports the BBC’s Rob Wilson.

Sat in a ground-floor flat in the city of Adigrat, northern Ethiopia, Zefer Sultan is having her hair braided ready for the baptism of her first child.

Playing on the TV in the corner of the room is her wedding video from a year before, which is keeping them entertained.

“Our wedding was almost at the same time as when the border was opened. It was a double happiness,” she explains.

Late 2018 was a time of jubilation for many living close to the Ethiopia-Eritrea border.

A new peace deal between the previously warring countries had been agreed, and movement across the border permitted for the first time in 20 years.

Families who had been separated for this time were reunited, and events such as Zefer’s wedding brought friends and relatives together to celebrate once again.

“Now I hope our son’s baptism will be even better. I hope lots of family from both Eritrea and Ethiopia will come,” Zefer adds.

The ceremony is set to take place in Zalambessa, where the families of Zefer and her husband Zeray come from. It is situated just on the Ethiopian side of the border.

The town saw heavy fighting during the 1998-2000 war and suffered from economic stagnation for the following 18 years as the border was closed and heavily militarised on both sides.

Everyone in the town has a story of separation.

‘We had to watch the funeral from a distance’

Important family events such as baptisms and weddings were missed by many. In some cases, people were not able to say goodbye to their loved ones as they were taking their final breaths.

Abrahaley Gebremariam, a local Ethiopian photographer, was unable to reach his ailing grandmother in Eritrea.

“We had to watch the funeral and remembrance services from a distance, we had no choice but to grieve her death from here,” he says, pointing out her village just across the border.

“But we were with her in spirit.”

Abrahaley has been able to cross the border twice since 2018 to celebrate religious festivals and visit his family.

“I am the flesh and blood of both people,” he says.

This sentiment oozes through the borderlands.

It would be easy to imagine there might be animosity between Ethiopians and Eritreans in the area; as many as 100,000 people were killed during the conflict and many more were forced from their homes.

But the social and cultural ties have proved to be deeper, and have endured the forced separation that followed the war.

Gebrehiwet Kahsay, the grandfather of Zefer’s new-born baby, explains why.

“The people were not in conflict, the problem was the leaders,” he says.

“The people never betrayed each other.”

Borders open – and then close

Zalambessa started to go through a transformation when the checkpoints opened again in 2018. Unrestricted movement brought about a business boom as trade and travel multiplied. Local businesses reaped the benefits.

“It became a bustling trade hub with hundreds of vehicles travelling back and forth. Peace and reconciliation enabled me to work in both countries as a cameraman,” Abrahaley recalls.

But just months after the border opened up, the official checkpoints began to close once again.

No official reason was given at the time, and almost all of the checkpoints are still closed to all trade and traffic.

While Ethiopia and Eritrea both say they are trying to resolve the situation, no formal agreement has been reached.

Nonetheless there has been a fundamental and lasting change. The border itself has been demilitarised and is not patrolled as it was before, so informal movement on foot continues in a way unimaginable just two years ago.

The bustling Saturday market in Zalambessa is one place where this is apparent.

It has been given a new lease of life since the peace agreement, when Eritreans started coming to buy goods.

And now while vehicles are restricted at the checkpoint, shoppers continue to walk across, carrying what they can in their arms.

For one Eritrean woman this meant tying a large wooden table to her back and walking three hours to get home. But she was not downhearted.

Before the border opened, she says she had to travel five hours to get to the nearest market in Eritrea.

At Zalambessa Health Centre, the border opening saw a surge in people coming across from Eritrea to receive services.

While the numbers have fallen since the border checkpoints closed again, some still make the difficult journey on foot.

Everyone who comes to the clinic is treated equally.

“We have no reasons to treat Eritreans any differently than we do Ethiopians. We provide medical care to anyone first and foremost because they are humans,” says acting director Dr Samrawit Berhane.

Patients tell the staff that in many cases it is closer than the nearest clinic in Eritrea, and some say they receive better treatment too.

Samrawit explains that they have also noticed a number of women coming specifically for family planning services and contraceptives. 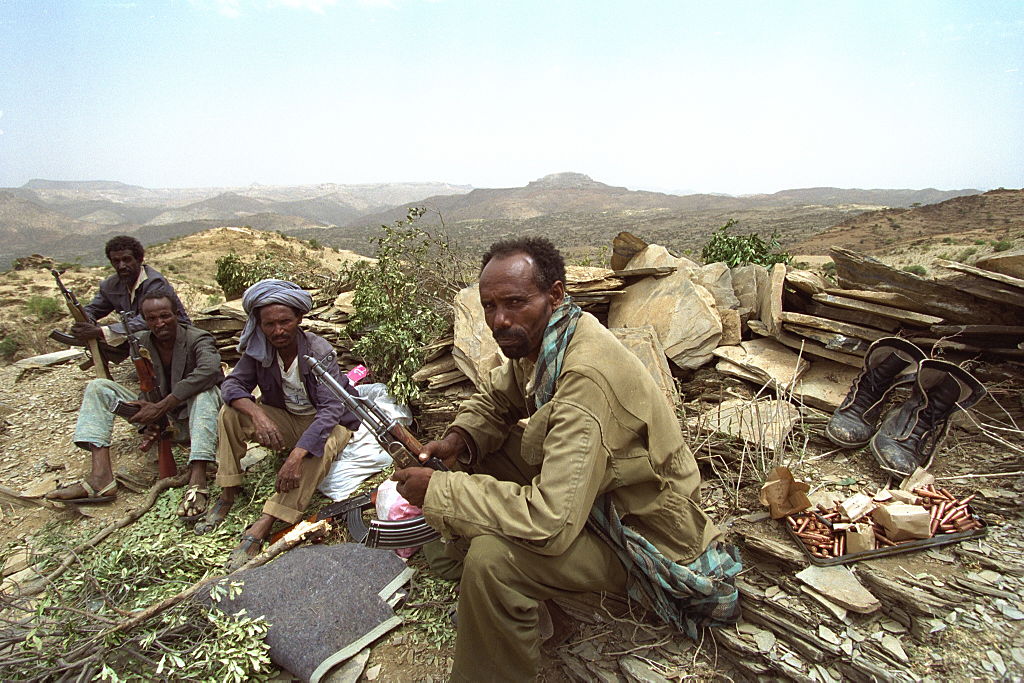 They say that in Eritrea, their husbands must grant permission for such services, and collections of contraceptives must be made together.

“Many women tell us they prefer to come here so that they can avoid these restrictions,” says Samrawit.

‘We are brothers and inseparable’

As you drive north towards Zalambessa, the vast and rocky landscape is awe-inspiring. But just as striking is the amount of construction work under way.

Peppered all along the road are half-built houses and blocks of flats, huge piles of gravel and sand, wooden scaffolding reaching up to the sky.

When the border opened in 2018, entrepreneurs came from all over the country to invest along the road.

Among them was Fisehaye Hailu, a self-assured and straight-talking Eritrean man who left his country after being detained as a political prisoner for 13 years. He has the look of a man who knows a hard day’s work.

“It felt like things had brightened up overnight and I didn’t waste any time before buying a plot of land,” he says.

Fisehaye knows Zalambessa well, having been born just across the border.

Now his business venture is a three-storey hotel in the town.

“After it is finished, the name of my hotel will be an expression of my desire for the two people to be together. So I plan to name it The Two Brothers’ Hotel,” he explains.

“It’s to say we are brothers and we are inseparable.”

The day of Zefer’s son’s baptism starts at 03:00 as they make their way up to the cliff-top church overlooking the borderlands between Ethiopia and Eritrea.

As the ceremony begins, relatives from both sides of the border gather at the house belonging to the parents of her husband at the bottom of the hill.

Zeray is keen to introduce one guest in particular, one of his cousins who has come from Massawa in Eritrea, as she did when he married in 2018.

“The fact that she has been with me from my wedding until now shows you love, culture and unity,” he says.

Although she did not want to disclose her name, she explains how the 2018 peace deal has changed her life.

“Before, we had no news of who was dead and who was alive. But now we have learned about our dead and we are happy to meet those who are still alive,” she says.

“It’s a massive difference. It’s like the difference between the earth and the sky.”

Despite many sharing similar feelings about the new-found, but unofficial, freedom of movement, the closure of border checkpoints continues to affect all areas of life.

Zefer explains that there were actually fewer Eritreans at the baptism than at their wedding. Many chose not to come because they were not sure whether they would be allowed to cross the border.

“It’s worrying,” she adds. “If the checkpoints are closed, we can’t move forward.”

Previous article BREAKING: Buhari Orders Addition Of One Million Persons To Social Register
Next article A Few Points About Applying For a Canadian Visa