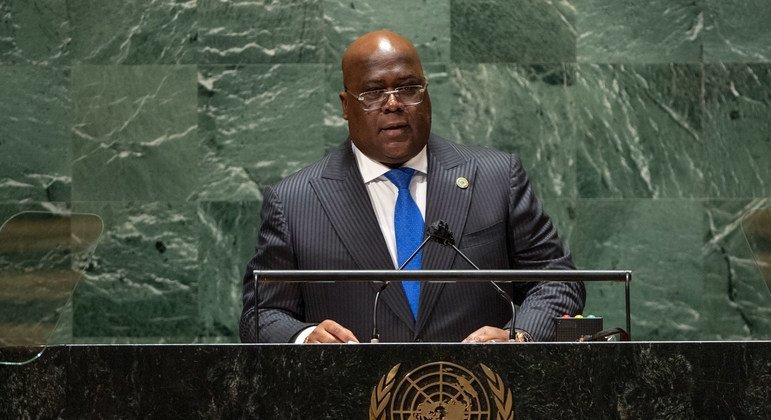 “There are less than six weeks left before COP26 and nine years before 2030. For Africa, the year 2030 will be marked by a drop in GDP of up to 15 per cent reduction in agricultural yields and a sharp increase in the risk of coastal flooding and in island countries,” Mr. Tshilombo said.

He noted that, to cope with the negative impacts of climate change, the African continent will need $30 billion a year to adapt. This amount should increase to around $50 billion by 2040.

“Africa does not need charity,” but constructive win-win partnerships to make better use of its collective national wealth and improve the living conditions of its people, he stressed.

Mr. Tshilombo was speaking at UN Headquarters at the opening of the high-level week of the General Assembly. After being held virtually last year due the coronavirus pandemic, this year’s gathering will feature “hybrid” activities that will include leaders in person along with virtual participants.

Speaking about the COVID-19 pandemic, he said Africa “Africa has not folded its arms and does not intend to capitulate” to the virus but stressed all the difficulties the countries are facing.

He welcomed initiatives related to financing of the economies, in particular those of the G20 on the suspension of debt service and the common framework for debt restructuring, and pointed to the allocation of $650 billion in special drawing rights (SDRs) from the International Monetary Fund (IMF).

For him, the $33 billion allocated to Africa “are insufficient in view of the immensity of its economic stimulus needs.” The African Union supports the objective of the Paris Summit, $100 billion in SDR for the continent.

Regarding the withdrawal of the UN Mission (MONUSCO), he agreed to the timeline approved by the UN Security Council, with a transition period that expires in 2024.

He asked for the process to be “gradual, responsible and orderly” and said he expects “the United Nations and the Security Council to give all the necessary means to MONUSCO and its Rapid Intervention Brigade so that they fulfill their mandates.”

“This is to ensure that the troops deployed have the required capabilities and means, including the necessary training to meet the requirements of the reality on the ground and the asymmetric warfare currently waged by armed groups and Islamist terrorists,” he explained.

Speaking about the elections scheduled for 2023, he said he hopes to contribute to “the organization of a free, transparent, inclusive and credible” vote.

The threat of terrorism

On the topic of peace and security, the resident said “the scourge of insecurity caused by the cohorts of terrorists, armed groups, mercenaries and criminals of all stripes is undermining the institutional stability of young democracies and destroying the efforts of many African leaders to develop their countries.”

He argued that the fight against DAESH was won in the Middle East, but in Africa “AQIM and other groups affiliated with DAESH are gaining more ground every day”, in places like Mali, Niger, Nigeria, Cameroon, Chad and Burkina Faso.

About his country, he said “islamist” fundamentalism has reached the east” of the territory, which is “paying a heavy price in the provinces of Ituri, North Kivu, South Kivu and Maniema.”

“Africa refuses to serve as a base for international terrorism”, he added.

Recently, political crises have erupted in a few Member States, but Mr. Tshilombo argued that “these crises cannot obscure the enormous progress made by the majority of African countries in terms of democracy and good governance.”

“This is how the Congolese people continue their noble and exhilarating struggle against dictatorship, autocracy and the values ​​that still structure our actions,” he said.

Last June, the Democratic Republic of Congo entered into a programme with the IMF and is currently benefitting from the assistance of the World Bank to carry out major social projects and basic infrastructure. Mr. Tshilombo spoke of “courageous reforms” that should accelerate economic growth accelerated to over 5 per cent a year.

He ended his speech addressing the “endless problematic of the reform of the United Nations and of the representation of Africa within its Security Council.”

“It is a question of the effectiveness of the United Nations and of justice to a continent an entire section of humanity whose role continues to increase every day,” he said.

He added that is country supports a proposal that adds two additional non-permanent members for Africa and two seats as permanent members, with the same rights, including veto.