AMMAN – Lawyer Enas Zayed believes that the impact of the disruption to courts in order to limit the spread of the Covid-19 virus will extend to the coming years, and not be limited to just the current time. The stoppage of courts’ work during March and April will be reflected in delays in deciding cases by repeatedly delaying sessions, in addition to overcrowding the courts will witness as a result of the issues arising from the Coronavirus crisis.

“Many people think that the situation will return to its previous state after the end of the crisis, from my point of view as a lawyer, I do not think this will happen”. This is how Zayed summarized the case of the justice sector two months after the disruption of the Sharia, regular and ecclesiastical courts since the defense law was announced. She also indicated that the quality of cases will differ after the ban, and that the number of cases will increase. Zayed believes that citizens are now in need of clarifications regarding procedures in light of the minimum work of the courts, according to the decision of the Judicial Council, on April 26, as its work will focus on the consideration of urgent requests that cannot be delayed, criminal cases, and receiving appeals. This requires providing the necessary clarifications to citizens awaiting a decision on their case, saying that “the appearance of the Minister of Justice on the TV screen is as important as the appearance of the Minister of Health.”

Citizens are affected by the disruption of the judiciary system. This was clear when merchants had to close down during the crisis, yet, they were obliged to pay rent despite the fact the Civil Law states they are not obligated to pay the rent as long as the disruption is due to governmental order. Therefore, many tenants are not paying for the rent, as a result, owners shall be harmed as they shall not be able to pay for their obligations. The Ministry of Justice is to clarify this issue, among others.

How Does Court Disruption Harm Citizens?

Disrupting the course of justice during the comprehensive lockdown caused the suspension of many cases, especially those arrested without access to a lawyer, in addition to the women who were deprived of alimony due to legal and procedural challenges. The director of the Justice Center for Legal Aid, Hadeel Abdulaziz, explains that many women were deprived from receiving the due alimony from the date the lawsuit was filed, according to a status paper issued by the Jordanian Women Solidarity Institute on May 9th, on issues of personal status in light of the Coronavirus pandemic and beyond.

The impact of court disruption is evident in the case of the Bangladeshi journalist Salim Akash, who was arrested by the Prosecutor on April 14 for sharing a TV report on his Facebook account, which addresses the difficulties faced by many Bangladeshi workers in Jordan during the Coronavirus lockdown. He was released and then returned to the governor who ordered his deportation. Akash will remain in administrative detention until the deportation decision is implemented, as he was not able to appeal to the judiciary system to stop the deportation, nor was he granted the right to have a lawyer with him during the investigation. He is currently still detained according to international organizations.

Legal counsel at the Lawyers Without Borders organization, Moaz al-Momani, affirms that the violation of a fair trial guarantee was clearly affected during the crisis, stressing that many cases related to breaching the defense law in particular have referred the people convicted of them to the judiciary without the presence of a lawyer.

Regarding the lawyers’ offices returning to work, Abdel Aziz says that it does not mean the return of justice but rather a preparation for it. In addition, the opening helps the lawyers arrange their papers and sign their documents, but it is an insufficient and incomplete step, because trials need lawyers. Zayed agrees, stating that not operating courts will not solve the problem because lawyers work mainly on procedures performed in offices and ministries, and if they are closed, the work will be limited to consultations that can be done over the phone.

Guaranteeing the Right to Fair Trial

Guaranteeing the right to a fair trial is one of the rules that cannot be restricted, and those rules approved by the Commission for Human Rights of the European Center for Constitutional and Human Rights (ECCHR) in Berlin, include the principle that a person is innocent until proven guilty, the right to a lawyer, and the law’s non-retroactivity. The Executive Director of the Human Rights Law Group (Mizan), Eva Abu Halawa, confirms that imposing restrictions on freedoms in the context of emergency started on March 17, excluded some of the rights contained in the International Covenant on Human Rights, which Jordan ratified, and the most prominent one is ‘the right to a fair trial’.

Abu Halawa expresses concerns about the impact of restarting pending major felonies, juveniles, domestic violence, and labor cases suspended since the beginning of the crisis, when work ceased again during the judicial holiday granted to lawyers according to the Judicial Independence Law and its amendments No. 15 of 2001, scheduled next July, for two months. This will lead to the accumulation of cases, the prolongation of the conflict, and the increased burden on the judge in terms of the high number of hearings per day.

Lawyer Nour Al-Imam considers that the professional responsibility of lawyers requires them to reconsider the judicial holiday, and work during it to compensate for the suspension due to Covid-19, saying, “We need to work to prevent the loss of people’s rights, because we are guardians of justice as lawyers, and as we have asked to return for the profession, we have a responsibility to guarantee people’s rights”. This is the reason behind the demand for a reconsideration of the holiday; to safeguard the interests of the citizens represented by lawyers.

Imam explains that the crisis showed the importance of rapid measures to ensure justice, especially in light of the long period of unemployment, as Sharia judiciary in particular stopped for a long time, which led to the loss of the rights of many women. So, the judiciary’s facility suspension harmed many human rights guaranteed by the Jordanian constitution, stressing the importance of faster procedures for the courts when they return to their full work.

For his part, the head of the Bar Association, Mazen Irsheidat, said that the decision on the judicial holiday and its arrangement will be made in coordination between the union, the Ministry of Justice and the Judicial Council, as the latter will put in place a mechanism to deal with the accumulated cases during the crisis as well.

Irsheidat believes that it is difficult for the courts to return to work fully in the absence of conditions for public safety, especially since they house many gatherings of clients, lawyers and judges. He also believes that it is best to gradually return to work according to the recommendations of the Epidemiology Committee and the World Health Organization. In addition, he indicated that many problems have occurred and will occur between employers and workers, between owners and tenants, the law of defense orders and their appeal before the administrative court, and compensation, which makes it necessary to have legal references related to the mechanism of the sector returning to work.

The association head shows that lawyers are seeking to find solutions to the cases they follow during the crisis, such as conducting a remote trial, stressing that there will not be any pressure and accumulation of cases in the coming years if work is done in order.

This is what Abdul-Aziz explains by saying that the crisis showed the Kingdom’s need for a bigger response during crises. The spread of the virus accelerated the activation of the trials process from a distance, despite resisting this idea at the beginning. It also highlighted the need to develop the legislative and technical system to activate remote trials, with no omission of certain guarantees, such as a lawyer’s right to discuss witnesses or a person’s right to appear before a judge.

The Committee for the Administration of the Justice Sector published a strategy for how the sector would work during and after the curfew, and after the crisis ended. The most prominent of which was the expansion in the use of remote trial technology with a presentation of the mechanism of its work, how to pay agency fees, the appearance of the accused before the governing body and reporting the indictment, and recommended the formation of a crisis management team in the court, with the introduction of safety procedures and giving priority to cases in which there are detainees in the correction and rehabilitation centres and juvenile cases, for example, while offering electronic services provided by the Ministry of Justice. 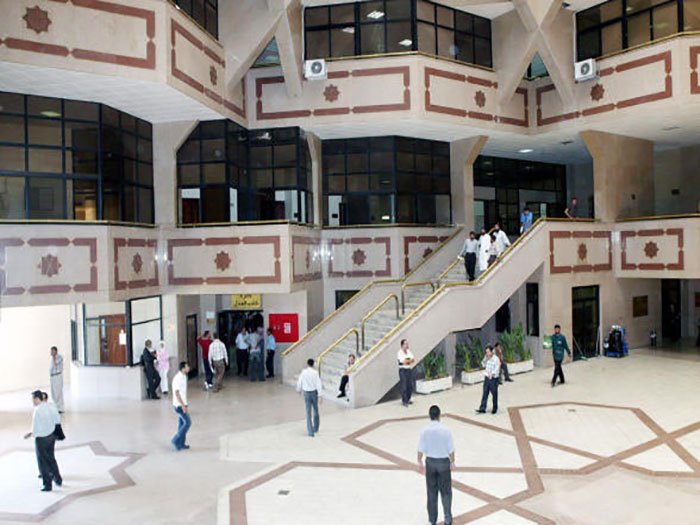