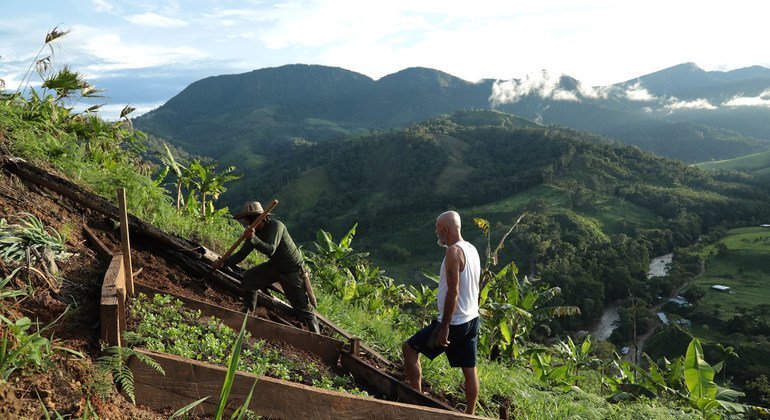 Carlos Ruiz Massieu, Special Representative and head of the UN Verification Mission in Colombia, said authorities on 6 July arrested an individual allegedly behind the killing of Alexander Parra, a former member of the Revolutionary Armed Forces of Colombia—People’s Army, and leader of the former territorial area for training and reintegration in Mesetas, Meta.

“These arrests are an example of the results that the mechanisms in the Peace Agreement can deliver”, Mr. Massieu said, and a reminder of the need to provide them with the support required to carry out their tasks.

The arrests were made during a joint operation by two bodies created by the Final Peace Agreement in late 2016 which ended Latin America’s longest running civil war; the Elite Corps of the National Police, and the Special Investigations Unit of the Attorney-General’s Office.

Safety essential for those who laid down arms

After months of uncertainty and mounting security risks from illegal armed groups, Mr. Massieu said operations are now underway to transfer the former territorial area for training and reintegration in Ituango – where 11 former FARC-EP members and seven of their relatives were killed – to a new location in Mutatá.

“The hopes of dozens of former FARC-EP combatants and their families, who were forced to leave due to the escalating violence, are now placed in this new site”, he said, underscoring their essential need for protection as they reintegrate into civilian life.

Presenting the Secretary-General’s report on the Mission, he said the COVID-19 pandemic has laid bare the vulnerable situation of roughly two-thirds of accredited former combatants who currently reside outside the former territorial areas for training and reintegration.

‘Ethnocide has not stopped’

Offering a perspective from her own life, Clemencia Carabalí Rodallega, of the Municipal Association of Women, in Cauca, introduced herself as a survivor of a 4 May 2019 attack, which also threatened the lives of 25 other people working to defend the ethnic and territorial rights of communities in Colombia.

“Ethnocide in Colombia has not stopped,” she said. Not a day has passed since the Spanish invasion 528 years ago that a black or indigenous person has not been killed, a member of the indigenous or cimarrona guard has not been threatened, a woman has not been raped, or a human rights defender has not died by violence.

She said that since the signing of the Peace Agreement, 686 leaders and human rights defenders have been murdered, 160 of them in this year alone.  She described the 2019 assassinations of a mayoral candidate from Suárez municipality and a governor of the Nasa indigenous community, along with the dismemberment, earlier this month, of a member of the Renacer Afro-Colombian Community Council, in Cañón del Micay.

“These situations have increased exponentially due to the COVID-19 pandemic”, she stressed.

‘Put yourselves in our shoes’, Council told

More broadly, she said the Government must comply with the entire Peace Agreement – especially its Ethnic Chapter and provisions on gender – and effectively investigate and prosecute those behind the violations.

She invited the international community to “put yourselves in our shoes” and visit the territories, accompanying Colombians in their peacebuilding initiatives, “not only through technical and economic support, but also with political commitment, as guarantors.”

Coronavirus has stopped trials by jury, and that’s not necessarily a bad thing | Geoffrey Robertson | Opinion