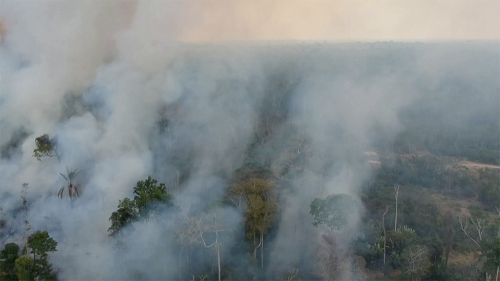 (Brasilia) – Fires resulting from unchecked deforestation are poisoning the air millions of people breathe, affecting health throughout the Brazilian Amazon, the Amazon Environmental Research Institute (IPAM), the Institute for Health Policy Studies (IEPS), and Human Rights Watch said in a report released today. Fires and deforestation in the Amazon increased dramatically during 2019, President Jair Bolsonaro’s first year in office, and 2020 is already proving to be worse, the groups found.

The 50-page report, “‘The Air is Unbearable’: Health Impacts of Deforestation-Related Fires in the Brazilian Amazon,” uses official health and environmental data to estimate that 2,195 hospitalizations due to respiratory illness are attributable to the 2019 fires. Nearly 500 involved infants under 1 year old, and more than 1,000 involved people over age 60. These hospitalizations represent only a fraction of the total health impact from fires, as millions of people were exposed in 2019 to harmful levels of air pollution resulting from the deforestation-related burning of the Amazon.

“Until Brazil effectively curbs deforestation, the fires can be expected to continue every year, furthering the destruction of the Amazon and poisoning the air that millions of Brazilians breathe,” said Maria Laura Canineu, Brazil director at Human Rights Watch. “The Bolsonaro administration’s persistent failure to tackle this environmental crisis has immediate consequences for the health of Amazon residents and long-term consequences for global climate change.”

The smoke is rich in fine particulate matter, a pollutant linked to respiratory and cardiovascular diseases, as well as premature death. Children, older people, those who are pregnant, and people with pre-existing lung or heart diseases are especially vulnerable.

The groups’ assessment of the health impacts includes a statistical analysis of government data on hospitalizations, deforestation, fires, and air quality, in particular the presence of pollutants strongly associated with the Amazon region fires. The hospitalizations attributable to the fires lasted on average 3 days and totaled nearly 7,000 days in hospitals.

The assessment is also based on interviews with 67 healthcare providers, officials, and experts. They said the impact of fires extended far beyond the hospitalizations, as many people made ill by the smoke were unable to reach health facilities, and many more experienced respiratory problems that, while serious, did not require being hospitalized.

“The conditions are graver the younger children are,” the associate director of a children’s hospital said of children with pre-existing diseases. “Newborns born prematurely and babies who use respiratory machines are very vulnerable.”

Illegal deforestation and subsequent fires often occur in or near Indigenous people’s territories, sometimes destroying their crops and depleting stocks of edible and medicinal plants and hunting game, in addition to affecting their health.

Healthcare providers and officials fear that medical facilities already struggling with the Covid-19 pandemic in 2020 will face further stress caring for people affected by fires, potentially collapsing the health system in parts of the Amazon region. The smoke may also aggravate the virus symptoms, resulting in more serious cases and deaths.

“Authorities should do more to address this chronic and preventable public health crisis,” said Miguel Lago, IEPS director. “They should implement an effective air quality monitoring mechanism and enforce air quality standards that protect health through preventive and responsive policies, with special attention to vulnerable groups.”

Since Bolsonaro took office in January 2019, his administration has undermined Brazil’s environment agencies and sought to weaken restrictions on protected areas and Indigenous territories. Deforestation increased 85 percent during his first year in office, according to a conservative estimate from Brazil’s DETER satellite monitoring system. The destruction has continued apace in the second year.

Under Brazil’s legally binding National Policy on Climate Change, the government committed to reduce the yearly deforestation rate overall to 3,925 square kilometers by 2020. Instead, 4,700 square kilometers had already been cleared this year by the end of July.

There are several reasons to anticipate that the Amazon fires will be more intense this year. By April this year, the newly deforested area combined with the area cleared but not burned in 2019 already totaled 4,509 square kilometers that could be set ablaze during this dry season. In July, 28 percent more fires had been detected than during the previous July.

Bolsonaro has sought to downplay the crisis. “They won’t find any spot of fire, nor a quarter of a hectare deforested,” Bolsonaro told South American leaders at a meeting on August 11, despite the government’s own official data showing the contrary.

In contrast, Vice President Hamilton Mourão said on August 10 that government agents were executing “urgent measures to contain deforestation and fires.” As head of the Amazon Council, a body recently created in response to mounting criticism, Mourão repeatedly deployed the army for environmental enforcement. The effectiveness of these operations has been negligible, as the continued increase in deforestation and fire detections in 2020 indicates.

The Bolsonaro administration decreed a moratorium on fires for this year’s dry season, but without more effective enforcement its impact is likely to be limited, the report said.

“The federal government has an obligation to protect the unique ecosystem that is the Amazon as well as its inhabitants, but the accelerated destruction of the rainforest is hastening us towards a tipping point where it might no longer be able to recover, with irreversible consequences for the Brazilian economy and global climate change,” said André Guimarães, IPAM director. “The federal government should urgently ensure effective coordination between all environmental enforcement agencies to avert this catastrophe.”

Selected Accounts from the Report:

The air pollution was especially “intense” during the 2019 fire season, said a doctor who works at Río Branco’s Santa Juliana General Hospital in Acre state: “I had to hospitalize lots of patients with chronic diseases, especially chronically obstructive pulmonary disease and heart failure,” which he attributed to the impact of pollution from the fires. After treating patients for a condition that had developed or deteriorated during episodes of critically bad air quality during fire season, he said he advised patients not to leave their homes, but lamented that state authorities did not issue such health warnings to the general population.

In Lábrea, the southernmost municipality of Amazonas, the municipal health secretary said the smoke from the fires has a dramatic impact on air quality every year. “I suffer greatly myself; I can barely speak, and my throat and eyes dry up,” she said. “The demand in health care increases by 30 percent during the fire season, with a 20 percent increase in the purchase of medicine, equipment and inhalers.” There is also an “impressive increase” in the number of children and older people requiring ambulatory care due to respiratory problems. While most are treated and sent home, there are many relapses, as they continue to “feel the damaging effects of the fires, the dust, the smoke, the soot [and] they end up returning … [in some cases] once a week.”

“For weeks, the smoke covers the sky,” said a doctor who oversees a project providing health care to 15,000 Indigenous people and traditional communities living on the banks of the Tapajós River, in Pará state. “We see people become short of breath, develop allergies, bronchitis and asthma.” Most of the health impacts go unreported, he said.

In Porto Velho, the associate director of a children’s hospital said that children with pre-existing diseases like asthma, bronchitis, and rhinitis were most affected by the smoke. “The conditions are graver the younger children are,” he said. “Newborns born prematurely and babies who use respiratory machines are very vulnerable.” The official, a pediatrician with 30 years of experience, said that he and his colleagues were “very concerned” that this year’s fire season was coming as the state was already struggling to handle the Covid-19 pandemic.