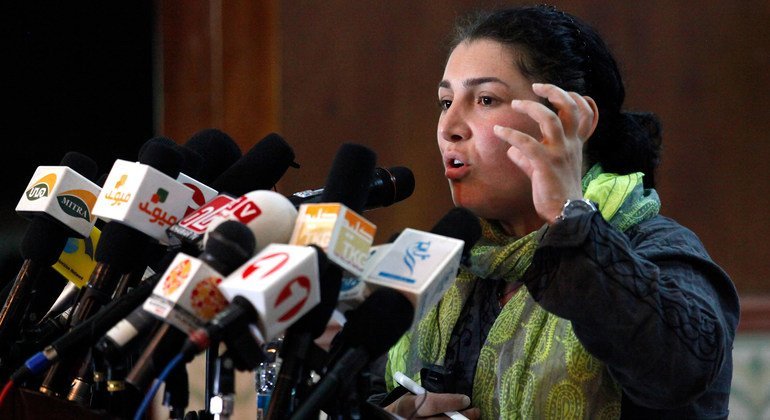 Speaking at an event in support of press freedom in Geneva, the UN High Commissioner for Human Rights noted that around 1,000 journalists have been killed in the last decade – and that nine in 10 cases “are unresolved”.

Her comments, on the eve of the trial of alleged accomplices of extremists who killed 12 people at the French satirical weekly magazine, Charlie Hebdo in 2015, were echoed by political cartoonist Patrick Chappatte.

“We live in an open world with closed minds”, he told participants at the UN General Assembly side-event for the freedom of the press and freedom of expression.

Amid the ongoing coronavirus pandemic, the work of the media is paramount, High Commissioner Bachelet continued, as their reporting is “an essential tool for officials to quickly learn where measures are being inadequately applied”, and what concerns are most important to people.

Without naming them, she said that several countries had seen “increasing politicisation of the pandemic and efforts to blame its effects on political opponents, have led to threats, arrests and smear campaigns against journalists who maintain fact-based information about the spread of COVID-19 and the adequacy of measures to prevent it”.

She added: “When journalists are targeted in the context of protests and criticism, these attacks are intended to silence all of civil society and this is of deep concern…Journalism enriches our understanding of every kind of political, economic and social issue; delivers crucial – and, in the context of this pandemic – life-saving  information; and helps keep governance at every level, transparent and accountable.”

At a press conference after the event, Swiss President Simonetta Sommaruga echoed the High Commissioner’s concerns over threats to freedom of expression.

Even in Switzerland, where people have the opportunity to vote multiple times a year, the concept should not be taken for granted, Ms. Sommaruga explained, in response to a journalist’s question and earlier comments about the shrinking space and threats to the Press being “not always from dictators (but) also from business models”.

“In our country, the economic situation for the Press is very, very difficult, so we (the Federal Government) are looking at ways how we can better support it, because we think that the Press, the media, provides the infrastructure for democracy,” she said. “If we want this infrastructure to exist, we also need to support it, while also ensuring its independence.”

Earlier, Mr. Chappatte described how “moralistic mobs” now used social media to bully others into getting what they want.

It was no longer repression “by the State or the religious powers, but society ourselves”, he insisted.

Indomitable Digitization: 5 Simple Marks on Advantages of the Digital Economy in Sub-Saharan Africa

The Mandela that I Know, by Siyabulela Mandela