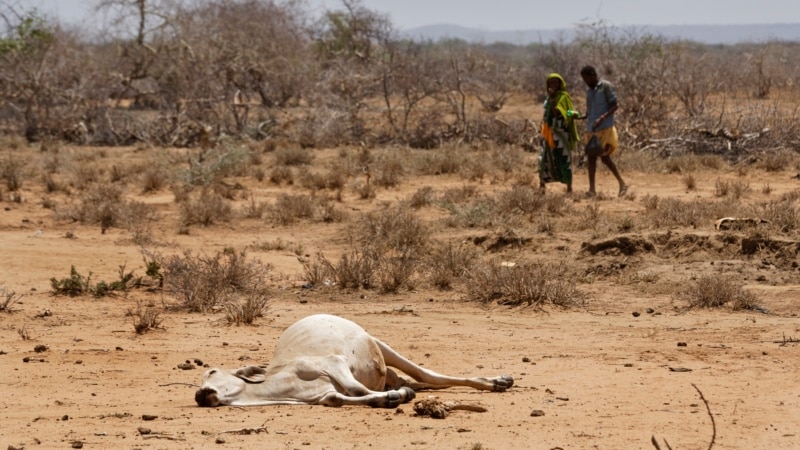 The International Rescue Committee says more than two million Kenyans are facing hunger due to poor rainfall. Kenya’s president, Uhuru Kenyatta, declared a national disaster this month because of drought.

Thirty-six-year-old Suleiman Ahmed Osman lost 50% of his livestock to drought in the past six months. He says more are dying now due to worsening drought.

“When we lost this number of animals there is no other source of income,” he said. “To source our daily meal because we used to get milk and meat, sometimes selling the animals to get other food, sugar and other things. Now that the animals are very emaciated, nobody can buy them, no milk because the drought has affected them to the extent that no milk can come from the animal.”

The International Federation of Red Cross and Red Crescent Societies (IFRC) says Kenya received insufficient rainfall during the October to December 2020 and March to May 2021 rainy seasons, leading to the current drought situation.

Abdullahi Musa has been buying animal feed and water for four months now for his more than 100 cattle in Garissa, along the Kenya and Somalia border.

“There are two sets of livestock herders,” he said. “There are those who the drought in Kenya has affected them there are those who crossed to Somalia to get pasture but came back due to lack of water. I am among the people who are not so affected. I have lost some animals but most of them are alive. But 90% of animal herders have lost their livestock. They got nothing.”

The head of the organization in Kenya, Mohamed El Montassir Hussein, says he is concerned about the growing humanitarian situation in some 20 out of 47 counties.

“Our concern overall is the protracted drought situation and protracted aspect of drought in Kenya that’s been over the years coming again and again and also concern is extended to the growing humanitarian needs as people move out of their homes searching for places closer to water sources,” he said.

The IRC says climate change is the main driver of the region’s recurring drought and locust outbreaks.

Kenya’s National Drought Management Authority predicts the food insecurity situation will persist until the end of the year.

The drought management authority says people’s fortunes may change if the affected areas get rain in the next three months.